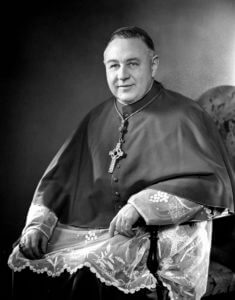 Bishop of Providence, RI, archbishop of Baltimore, MD; b. New Britain, CT, Dec. 30, 1889; d. Washington, D.C., Dec. 8, 1961. The second son of Irish immigrants, Patrick and Margaret (Ryan) Keough, he attended parochial school in his native city and began his studies for the priesthood at St. Thomas Seminary, Hartford, Connecticut. In 1911 he was sent to the Sulpician Seminary at Issy, France, but he returned after the outbreak of World War I and continued his theological studies at St. Bernard’s in Rochester, New York. He was ordained for the Hartford diocese on June 10, 1916. For three years he did parochial work; thereafter, until his appointment to Providence (Feb. 10, 1934), he was engaged in special diocesan assignments as institutional chaplain, director of the Society for the Propagation of the Faith, assistant chancellor, and secretary to the bishop. Keough was consecrated in his see city on May 22, 1934, by the newly appointed Apostolic Delegate, Abp. Amleto Cicognani, later cardinal and Vatican secretary of state. During his 13 years as ordinary of a heavily Catholic state, Keough founded a minor seminary, used his knowledge of French to soften differences that had risen between the French-speaking and English-speaking members of his flock, and employed his financial talents to overcome entirely the heavy debts burdening the diocese at his arrival. Despite his reluctance to leave his native New England, he was appointed to the nation’s premier see Nov. 29, 1947, and was installed in Baltimore’s basilica-cathedral by Archbishop Cicognani on Feb. 24, 1948.

Keough’s new position of prestige led to numerous major appointments to the National Catholic Welfare Conference, where he had already served in many secondary posts. He played a decisive role in the issuance of the historic 1958 statement of the American Catholic hierarchy against racial discrimination. Always concerned about the needy, he built a residence for the elderly (Stella Maris) and a consolidated home for deprived school-age children (Villa Maria); he also took the initial steps for constructing a new St. Vincent’s Infant Home and an adjacent maternity care residence (Villa St. Louise). His major building project was the construction (1954-1959) of an $8 million cathedral from funds bequeathed by a Baltimore merchant, Thomas O’Neill. This Cathedral of Mary Our Queen became the metropolitan center on Sept. 21, 1959. Two years later the archbishop was buried beneath its main altar.

As a retiring man of childlike piety and conservative temperament, Keough preferred a gradual and quiet approach to solving the practical problems that completely absorbed his energies. Declining health, which began with a major illness in 1954, and the preoccupations of overseeing the construction of the new cathedral considerably restricted the general productivity of his later years.

By Rev. J. Joseph. Gallagher
Originally published in New Catholic Encyclopedia. Prepared by an editorial staff at the Catholic University of America (New York, McGraw-Hill, 1967-). Used with permission of author.