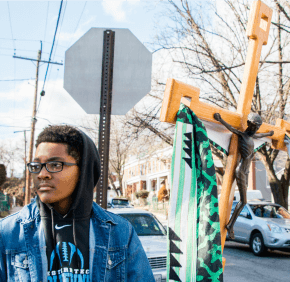 Amid crime and violence, West Baltimoreans now have a new sign pointing the way to peace.

Before a peace walk sponsored by St. Bernadine Parish, more than 100 from the parish and neighborhood applauded as a new street sign was unveiled in memory of Monsignor Edward M. Miller Jan. 19.

The longtime leader of St. Bernardine died Dec. 15, 2013. It was no coincidence that he was honored on Rev. Dr. Martin Luther King Jr. Day, as both are remembered as men of peace.

Deacon Barksdale said Monsignor Miller considered King his “mentor” and frequently quoted him in his homilies.

Bishop Denis J. Madden, who helped lead the crowd in prayer and song during the peace walk that followed, described both leaders as having “purity of soul” and as people who “never sought vengeance or retaliation.”

“They were generously involved in the community,” Bishop Madden said. “They really had the needs of the community at heart. Neither one of them was seeking a place for themselves. That motivated everything they did.”

The group made several stops, among them at the corners of Mt. Holly and Harlem Avenue, and at Mary E. Rodman Elementary School, near places affected by violence that Deacon Barksdale said needed to be “reclaimed” for Jesus.

The group sang “This Little Light of Mine” and “When the Saints Go Marching In,” and prayed the Prayer of St. Francis, which Monsignor Miller traditionally had his congregation say at Mass.

“Once you mention Monsignor Miller, everybody’s coming,” Hawthorne said of the walk. “Nobody’s staying home, because if you knew Monsignor Miller you had a friend for life.”

Choir member Rodney Waters, who has worshiped at St. Bernardine for about 10 years, said he attended a parish peace walk for a second time because it allowed him the chance to affect community outside of the church walls.

“If you’re only serving the people in your church, you’re limiting the Christian experience,” Waters said.

“These walks are in one way a drop in the ocean,” Bishop Madden said, “but they are a witness, they are letting everyone know this is where we are, this is who we are, and this is why we’re coming around.”

Before the street sign ceremony, members of the parish, explained how the example of Monsignor Miller inspired them. In an essay titled, “My Hero of Courage,” 12-year-old Kyle Alexander said that he intends to become a priest because of Monsignor Miller.

“We had to wait until he was dead,” Bishop Madden said, “to do it.”

Monsignor Miller, ‘mountain of a man,’ laid to rest