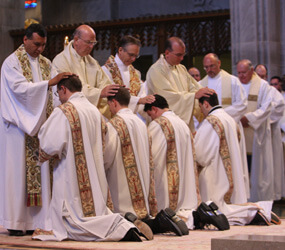 An hour before he was ordained a priest for the Archdiocese of Baltimore, 38-year-old Hector Mateus-Ariza walked quietly to the spot in the Cathedral of Mary Our Queen where Pope John Paul II had prayed nearly 14 years earlier. There, he knelt and prayed to God to help him as he began his priestly journey.

“I’m shaking,” said Father Mateus-Ariza as he emerged from the Blessed Sacrament Chapel in the Homeland church. “It’s so many emotions.”

As he reflected on all the people who had come to the cathedral to witness the ordination, as well as the responsibility and challenge of the priesthood, Father Mateus-Ariza‘s eyes filled with tears, and he said, “I feel like my heart is so small for all that is happening.”

Emotions ran the gamut on a sunny June 13 morning as Father Mateus-Ariza, Father Gonzalo Cadavid-Rivera, 37; Father Marc L. Lanoue, 43; and Father Ernest W. Cibelli, 27, were ordained to the priesthood in a tradition-rich ceremony.

Father Gerard C. Francik, the vocation director for the archdiocese, noted the historic nature of the day.

He said it’s the first time Latino immigrants have been ordained in the 200-year-history of the archdiocese.

“So we have people from all over the country, and all over the world really, who are here for the celebration,” he said.

“It’s a great joy to see this cathedral so full today, full of people with an enthusiastic spirit for what is about to happen,” said Archbishop Edwin F. O’Brien as he stood at the altar, joined by bishops William C. Newman, Mitchell T. Rozanski and Denis J. Madden of Baltimore as well as Bishop Kevin Rhoades, former rector and president of Mount St. Mary’s Seminary in Emmitsburg and Bishop Richard B. Higgins of the Archdiocese for U.S. Military Services. “Today as we ordain our four deacons to the priesthood, our presbyterate grows and becomes stronger.”

More than 100 priests, deacons and seminarians were present for the ceremony.

As he greeted friends and family before the start of the ordination, a widely smiling Father Cibelli said he felt “pretty good.”

“I think the Lord has given me a great sense of peace, and I’m excited and really grateful,” said Father Cibelli, who will continue his studies in Rome following a summer assignment in the archdiocese.

Addressing those gathered in both English and Spanish, Archbishop O’Brien described a palpable joy and said the friends from the parishes where the priests have served “rightly take pride on this day.”

“Through their love of Christ and his church, you have already seen how thoroughly and effectively we priests are shaped by the people of God,” he told the men.

Speaking during his homily on the importance of the Eucharist, the archbishop said, “With such an extraordinary gift entrusted to you, please, brothers, make this eucharistic sacrifice the center and peak of your priestly prayer life.

“Be totally convinced, brothers, that whatever success you can rightly expect from priestly activity will flow mainly from this sacrifice,” he said.

After the men were presented as candidates for ordination, they knelt before the archbishop and gently placed their hands in his, promising respect and obedience to the chief pastor of the archdiocese.

Then, as those gathered reverently chanted the Litany of Saints, the four men lay prostrate before the altar in a solemn, powerful gesture signifying their dependence on God.

Father Cadavid-Rivera said that for him, the most meaningful aspect of the ordination ceremony was when the archbishop, followed by some 100 priests, laid their hands on his head in an ancient gesture, rooted in Scripture, which signifies the conferral of the Holy Spirit.

“That is like the fraternal welcome that you are a priest of Jesus Christ now,” Father Cadavid-Rivera said. “That was really beautiful and emotional.”

Afterward, the men were presented with the stole and chasuble, the signs of the presbyteral office.

“I am the most happy woman in the world to present my son to God,” said Cecilia Ariza de Mateus, following the ordination of her son. “I’m very happy; it’s very special for me. Hector’s father died February a year ago, but he is here with us today.”

“We cannot believe this is happening. It’s a dream come true.”

Missionary of the Sacred Heart Father Joseph Jablonski spent 21 years in Colombia, which is where he met Father Mateus-Ariza and encouraged him to become a priest.

Wiping away tears of joy as he watched Father Mateus-Ariza administer his first blessings, he said, “It’s a great and joyful day for me because I’ve known him on his journey to the altar. He’s a great and loving man and will be a wonderful priest. It just fills my heart with joy.”

Visibly happy, Elaine and Gennaro Cibelli struggled to come up with the right words to describe their thoughts and feelings.

“All through the Mass I had all sorts of emotions – now that you’re asking me, I couldn’t put one into words,” said Elaine Cibelli. “To see four men in this day and age dedicate their lives to God and to the people – I think it’s absolutely fantastic.”

Father Lanoue said the most touching part of the ceremony for him was when, in his homily, the archbishop mentioned the recent death of his mother, Margaret Lanoue, as well as the death of his father, Russell Lanoue, many years ago.

Father Lanoue’s sister Elyse Lanoue described the day as bittersweet, noting that it was her mother’s “wish to see (her brother) be ordained.”

She said the most emotional aspect of the ceremony was seeing the other mothers carry up the gifts. “It really brought out the fact that our mother wanted to be there,” she said.

Father Cadavid-Rivera said it was difficult to express all the emotions he was experiencing after being ordained.

“It’s a beautiful day because my goals are accomplished,” he said. “All I want to do now is to give the best of myself to the Lord and to the people and say, ‘Thank you very much for all these blessings that bring me to this point in my life as a priest of Jesus Christ.’”

Maria Osegueda and her brother, John Cadavid, cousins of Father Cadavid-Rivera from Connecticut, were amazed at all of the people who showed up to support their cousin.

“He was able to go through a lot of difficulties to get to this step,” said John Cadavid, who was attending his first ordination, and acknowledged shedding tears of happiness.

“He is very humble, very joyful – he is very giving to people,” said Osegueda, explaining why her cousin will make a good priest.

His mother, Marta Rivera, said she is “proud to be the mother of a son who will serve the people and the whole world in the church.”

“I want to thank God for the blessing to have a son to be a priest,” she said.

“I’m happy and thankful for the mercy of God,” echoed Father Cadavid-Rivera’s father, Hernan Cadavid. “I’m convinced that with the grace of God, he will be an excellent priest. I want to thank all the American people and Spanish population for the welcome they have given him. I am very thankful to them.”