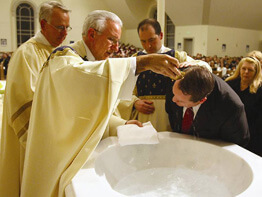 As parishes throughout the Archdiocese of Baltimore celebrated the resurrection of Jesus Christ on Easter, many pastors reported higher Mass attendance than previous years despite an unseasonably cold holiday that brought some snow flurries.

More than 800 people were welcomed into full communion with the Catholic Church during the Easter Vigil in the Baltimore archdiocese – about 100 more than last year – as priests and deacons reminded parishioners of the centrality of the resurrection to Christian life.

Father Michael Roach, pastor of St. Bartholomew in Manchester, said more than 2,000 people attended Easter Masses inside his parish’s brand-new church that opened in December. The attendance was double what it was last year, he said.

“We saw many, many new faces – many of them not even Catholic,” said Father Roach, noting that it was the first time many in the community had a chance to visit the new church.

“We had two extra Masses,” he said. “No one minded the cold outside.”

With the new church offering much more space than the tiny country church that had previously served as St. Bartholomew’s home, the pastor said the faith community revitalized old traditions like bringing out a figure of Christ’s corpus on Good Friday. Children put on a passion play that was “better than ever,” he said.

The pastor added with a chuckle that Easter is a time when clergy benefit from extra treats donated by thoughtful parishioners. His rectory is filled with special sausages, butter lambs and other goodies.

“They are embarrassingly generous,” he said.

Monsignor Martin Feild, pastor of St. Joseph in Taneytown, said his Masses were also more crowded than previous years, with standing-room-only at the 10 a.m. service.

“I think families come together at Easter,” he said. “A lot of non-Catholic spouses come. They want to worship and celebrate as a family.”

In his Easter homily, Monsignor Feild emphasized that Christ is “just as present to us today as on that day of resurrection,” he said.

Despite the cold weather, the parish went ahead with an Easter egg hunt that attracted more than 75 children, the pastor said.

Sister Constance Baker, S.S.N.D., pastoral life director of St. Charles Borromeo in Pikesville, reported a standing-room-only crowd at the 10:15 a.m. Easter Mass. The parish welcomed three people into the Catholic Church during the Easter Vigil – up from one last year. For the first time, St. Charles joined neighboring parishes of Holy Family, Randallstown; St. Gabriel, Woodlawn, and St. William of York, Baltimore, in working together to prepare people to be received into the church.

Sister Constance called it “very special” to welcome newcomers into the faith.

“I think it’s a sign the church is growing and that their witness of the faith does attract other people,” she said.

To encourage the many new faces at Mass to come back, parish leaders displayed a sign outdoors with the message, “Come join us for worship. Let us rejoice, the Lord is risen. Alleluia!”

“It was probably the coldest Easter we’ve had,” she said.

Holy Week is traditionally a time when Catholics who may not attend Mass regularly flock to church to refocus their religious commitment, said Father James P. Kiesel, pastor of St. Dominic, Hamilton.

Reaching out to a congregation of parishioners and visitors from several other states, Father Kiesel related his resurrection-themed homily to “new life, new hope, new dreams and new possibilities.”

The larger congregations gave the clergy an opportunity to inspire Catholics to embrace their faith, incorporate it into their daily lives and to build their parish populations, said Father Shawn Mahon, pastor of St. Thomas Aquinas, Hampden.

“Holy Week is a busy time for us and it’s important for us not to squander those occasions when we have a captive audience,” Father Mahon said. “I hope people leave Mass fulfilled.”

The resurrection should remind Catholics of the forgiveness Jesus gave and that their lives will be enriched with healthy portions of love, support for one another and mercy, said Father Paul Zaborowski, O.F.M. Cap., pastor of St. Ambrose, Baltimore.

Chaz Muth contributed to this article.