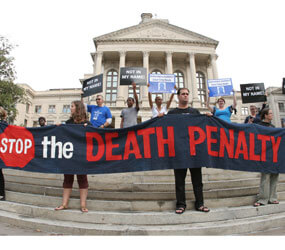 WASHINGTON – More than 200 Catholic theologians, scholars and social justice advocates cite the executions of Troy Davis in Georgia and Lawrence Brewer in Texas in mid-September as the impetus for their call to abolish the death penalty.

In “A Catholic Call to Abolish the Death Penalty,” posted Sept. 26 on the website Catholic Moral Theology, the signers said they protest the state-sanctioned killings of the two men and call for the abolition of the death penalty in the United States.

They said Davis’ execution is “particularly troubling for it shines a stark light upon many long-standing concerns about capital punishment.” While noting that they mourn the death of Mark McPhail, the Savannah, Ga., police officer Davis was convicted of killing, “we believe that a grave miscarriage of justice took place with Davis’ execution.” Serious doubt remains about Davis’ guilt, they said, and he maintained his innocence to his last breath.

The failure of Georgia’s Board of Pardons and Paroles and of state and federal courts to grant Davis a new trial “reveals a deeply flawed justice system,” they said. They called on lawmakers and President Barack Obama to repeal the Antiterrorism and Effective Death Penalty Act, “which created the legal conditions for executing a man whose guilt was not established beyond reasonable doubt.”

The letter said that even those “who do not share our faith convictions ought to recognize, as Justice William J. Brennan put it, ‘the death penalty is imposed not only in a freakish and discriminatory manner, but also in some cases upon defendants who are innocent.’“

They cited studies showing that black defendants are more likely than whites to receive the death penalty and that defendants accused of killing whites are three to five times more likely to be executed.

“In states that retain the death penalty, 98 percent of district attorneys are white and only 1 percent are black,” they said. “Execution is also irrevocable, and innocent people have likely been victims of it.” They said since 1973, 138 people on death row have been exonerated, most of them nonwhites who were poor.

The statement quoted the U.S. Conference of Catholic Bishops as saying the application of the death penalty “is deeply flawed and can be irreversibly wrong, is prone to errors and is biased by factors such as race, the quality of legal representation and where the crime was committed. We have other ways to punish criminals and protect society.”

Though Catholic tradition “acknowledged the necessity of capital punishment, in rare cases, to protect citizens from threats to the common good,” in current times “with more secure prison facilities that give us the means to offer such protection without executions, our church leaders have affirmed the need to eradicate the death penalty,” the statement said.

Among the theological reasons for their stance, they pointed to Blessed John Paul II’s argument that “the new evangelization calls for followers of Christ who are unconditionally pro-life… in every situation. A sign of hope is the increasing recognition that the dignity of human life must never be taken away, even in the case of someone who has done great evil.”

The pointed to 20th century theologian Karl Barth’s observation that “now that Jesus Christ has been nailed to the cross for the sins of the world, how can we still use the thought of expiation to establish the death penalty?”

The Gospel teaches to forgive and to love one’s enemies, to show love, not hatred and revenge, they said. “We need to forgive and love, both in fidelity to the Gospel and for our own well-being.”

“Therefore, in concert with our recent popes and bishops, we oppose the death penalty, whether a person on death row is guilty or innocent, on both theological and practical grounds,” the statement concluded. “While we especially deplore and lament the killing of Troy Davis, we also decry the death sentences of the more than 3,200 inmates on death row and the 1,268 executions since the death penalty was reinstated by the Supreme Court in 1976. We urge our nation to abolish capital punishment, and we also implore our churches to work unwaveringly to end it as well as all other threats to human life and dignity.”

The full text of the statement and the list of signers can be seen at: http://catholicmoraltheology.com/a-catholic-call-to-abolish-the-death-penalty.