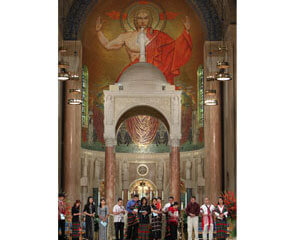 WASHINGTON – As the nation’s capital, Washington has been visited by millions since its official founding July 16, 1790.

With sites such as the Washington Monument, White House, the Capitol, Library of Congress, the National Archives, Smithsonian museums, and countless monuments and cultural happenings, tourists from across the world come to Washington for a taste of U.S. history.

Lesser known perhaps, but no less fascinating, are the Catholic historical sites around the city that attract pilgrims.

Catholicism in the U.S. was born in the Washington region, and the area still plays a vital part in the U.S. Catholic Church. The District of Columbia is home to the U.S. Conference of Catholic Bishops, seminaries, religious houses of prayer, and three prominent Catholic universities – The Catholic University of America, Georgetown University and Trinity Washington University.

In 1634, Jesuit Father Andrew White celebrated what is believed to be the first Mass to be said in the original 13 English-speaking colonies. The Mass was on St. Clement’s Island, now a Maryland state park, about 60 miles outside of Washington.

The site of the first Mass, marked by a large cross, can still be visited. Inside the St. Clement’s Island Museum, one can read the firsthand account written by Father White about his voyage and landing on the island with the first colonists of Maryland. He had accompanied Catholics on their voyage from England, where they had been persecuted.

Perhaps the most famous and recognizable Catholic pilgrimage site in Washington is the Basilica of the National Shrine of the Immaculate Conception. Construction of the national shrine began in 1920 and was completed in 1959. It is the largest Roman Catholic Church in North America and one of the 10 largest churches in the world.

It houses one of the greatest concentrations of 20th-century art in the world. Its treasures include two mosaics from Ravenna, Italy, a relic of Pope Pius X, papal jewels, a golden rose given to the shrine by Pope Benedict XVI, Venetian glass mosaics and glittering gold ceilings.

In 1979, Blessed John Paul II visited the shrine and declared that it “speaks to us with the voice of all America. … These people, speaking different languages, coming from different backgrounds of history and traditions in their own countries, came together around the heart of a mother they all had in common.”

Pope Benedict visited the shrine in 2008 and said in an address to a group of bishops: “I commend the church in your country most particularly to the maternal care and intercession of Mary Immaculate, patroness of the United States. May she who carried within her womb the hope of all nations intercede for the people of this country, so that all may be made new in Jesus Christ her son.”

In the summer of 2010, the shrine had more than 60,000 people attend Sunday Mass, gave 542 guided tours to visitors and hosted 7,000 pilgrims visiting the shrine with a pilgrimage group.

Veteran shrine tour guide, Sal Mazzuca, told Catholic News Service that these days around 20 percent of the visitors he shows around are non-Catholics, compared with the 100-percent Catholic audiences he had when he first began giving tours 53 years ago.

“You’re looking at one of the shyest people you’ll ever meet in your life, until I walk into this place,” Mazzuca said about his love for the shrine.

Mazzuca’s favorite part is the Our Lady of Lourdes Chapel, because “it’s so quiet in there and when you need just a spiritual kick in the pants, as I call it, I go sit in there and it helps things go away.”

Another draw for pilgrims to the capital city is the Franciscan Monastery of the Holy Land in America. The complex, the brainchild of Franciscan Fathers Charles Vassani and Godfrey Schilling, was constructed in 1898 as a place for people who were unable to make the long journey to the Holy Land itself.

The grounds of the monastery feature dozens of replicas of significant Christian sites from the Holy Land as well as from Europe, including many related to the life, death and resurrection of Jesus Christ.

The site now receives about 25,000 visitors a year, from as close as Alexandria, Va., to as far away as China, Russia and Australia. “We really do have an international house here,” Father Jeremy Harrington told CNS during an interview at the monastery.

Father Harrington, guardian and commissary, explained that the monastery is owned by the Holy Land Franciscans, to whom the Catholic Church entrusted the guardianship of the Holy Land 800 years ago. “We’re the supply chain for the Holy Land,” he said.

“A lot of people say this is an oasis in the middle of Washington – places of prayer, solitude. So they come here and walk through the gardens.”