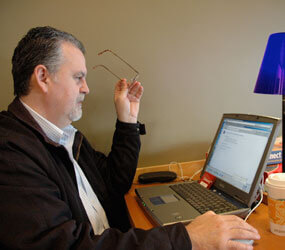 PORTLAND, Ore. – Ted Walsh is finally being forced to sell his house. He hopes a buyer comes before his money runs out completely.

The unemployed high-tech veteran, out of work for 18 months, has used up retirement savings and faces high medical bills for his wife and son. Meanwhile, he’s trooped through scores of job applications and a dozen face-to-face interviews. At 48, he’s up against hundreds of younger applicants at every turn. He’s even colored his hair to look younger, an act once unthinkable to him.

When an information technology manager position opened at Mentor Graphics in Portland in February, Walsh and 2,000 others applied in a span of only 24 hours.

“This is no fun,” said the lifelong member of St. Anthony Parish in Forest Grove, a suburb west of Portland.

Recognizing the plight of people like Walsh, Congress has extended unemployment benefits for those trapped in the economy’s jobless recovery.

The Oregon Employment Department reports that the state’s unemployment rate is standing steady at 10.7 percent, only slightly better than the historic lows of 2009. Last year on average, 26 percent of Oregon workers remained unemployed for six months or longer, the highest level seen in records kept since 1994.

The national unemployment rate has remained constant at 9.7 percent.

One friend who is a company recruiter looked over Walsh’s resume and applications. The diagnosis? Walsh is over-qualified for the jobs available.

“What it really means is that I know what I am doing,” Walsh countered wryly.

A friend at the state employment division has reached the conclusion that experienced workers like Walsh are sometimes seen as a threat to managers who are hiring.

In addition to marketing himself via social networking sites, Walsh has adopted a new strategy: learn several currently in-demand computer programs, using a federal program that pays tuition for workers from hard-hit industries.

Walsh has little confidence that the job market will return soon. He worked at Intel for 15 years and was laid off in 2006 when 10,000 jobs were shed. He was hired in 2007 by Merrill Lynch, which soon hit financial troubles and nixed his position in fall 2008.

He went from a respectable income to about $400 per week and had to pay for his own health benefits.

Joblessness has upped the stress in the Walsh home. His wife has fused vertebrae and cannot work much and his son has developed a mysterious knee ailment and can no longer attend college. At 23, the young man is hobbling around with a cane.

The family’s medical coverage has expired, so health costs are coming out of pocket.

The Walsh’s older son, 26, is due to be wed in October. He does have a job, but seeing the family problems has taken a toll.

“It’s supposed to be a happy time for him, but it’s been difficult, to say the least,” Walsh explained.

Walsh is trying to play the job-search game, seeking contacts inside companies who can advocate for him – any way to get people to know who he really is.

He admitted he sometimes feels a bit like Job, the Old Testament character whose life fell into a shambles.