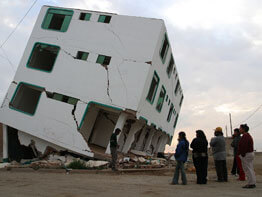 PISCO, Peru – At first glance, Freddy Sanchez appears to be one of the lucky ones. When a magnitude 8 earthquake struck this fishing port, his house remained standing while many of his neighbors’ homes and the church across the street collapsed.

But his luck may be running out. Government officials have said that the soil in the beachfront neighborhood where he lives is unstable, and they might prohibit rebuilding there. Officials have not talked with residents, however, and rumors are rampant.

“This is where my great-grandparents, my grandparents and my parents lived,” he said of the Pisco Playa neighborhood. “I have title to this land, and they can’t force me to move.”

Sanchez’s neighborhood has no running water, and the sewers have backed up, creating a foul-smelling puddle at the end of the street that draws flies and mosquitoes.

“Unfortunately, little progress is being made in housing. There hasn’t been a single house, not even half a house, built in Chincha, Pisco or Ica,” said Bishop Guido Brena Lopez of Ica, whose diocese includes those three towns located closest to the quake’s epicenter. “For people to have to live in a tent when they have small children is a calamity.”

Some tiny prefabricated houses have been set up on empty lots, but “they are temporary and precarious,” he told Catholic News Service.

Residents are still trying to rebuild their lives months after the Aug. 15 earthquake killed more than 500 people, injured more than 1,000 and damaged or destroyed about 100,000 homes in Pisco and the nearby towns of Ica, Chincha and Canete.

Thousands of people still live in tents, either in camps set up by the government or near the places where their houses once stood, where they can keep an eye on the little they have left and ensure that no one takes over their land.

On the main plaza in Pisco, beside the two towers that are all that remain of San Clemente Church, tents also serve as makeshift telephone and Internet booths. Scattered shops and restaurants around town have reopened, and people sell soft drinks and sundries outside temporary shelters.

“There is a lack of housing, but there is no way of rebuilding the housing until the water and sewer problems are solved,” said Father Alfonso Berrade, pastor of San Clemente Parish and director of the Pisco office of Caritas, the local affiliate of Caritas Internationalis, an umbrella group of Catholic humanitarian aid and development agencies.

Officials are doing a soil survey in Pisco, Father Berrade said. Based on the results, they will decide where to rebuild. Shortly after the earthquake, there was talk of shifting the main part of the city to more solid ground, but that appears to be impractical, he said.

Many are worried that they might lose their land rights because they do not have formal title to their lots. On the periphery of the city, some people have built homes on public land that they simply took over. Others live in houses that have been passed down through the family without legal title.

The diocese is trying to arrange legal assistance for people who need help with titles and is urging residents and government officials to ensure that new buildings meet stricter safety standards, Bishop Brena said. Because many people lived in rental housing and have nowhere to go now, he also called for reconstruction plans to include apartment complexes.

Meanwhile, residents who are going ahead with repairs or erecting makeshift shelters are dismayed by the inflated prices of building materials.

“They’re taking advantage of the people’s pain,” said Pedro Palacios, who was working outside a prefabricated house set up on the site where his 93-year-old mother’s adobe house once stood.

Julio Favre, head of FORSUR, the reconstruction agency set up by the government, has estimated that reconstruction will take two years and cost about $530 million, about $330 million of which would be for grants to people who lost their houses. FORSUR currently has about $60 million from government funds, loans and international donations, with another $107 million worth of donations pledged.

Post-earthquake cleanup is going slowly. While some buildings have been demolished, there are still piles of rubble in empty lots and on some streets. A few blocks from Sanchez’s house, an apartment building that broke from its foundation rests on one edge.

Across the street from the ruins of San Francisco Church in Pisco Playa, where seven people were killed when the roof collapsed, Rosa Moyano Lopez is living in an eight-foot-square tent with her four children, a sister and a niece.

Her home was destroyed, but the one-story house next door remained standing and has been converted into a soup kitchen for seven families on the block. The few pieces of furniture that could be rescued from the church office are piled in the street.

Although she is frustrated by the slow pace of earthquake reconstruction efforts, Moyano looks forward to rebuilding.

“If we were spared,” she said, “it’s because we still have a mission here on earth.”