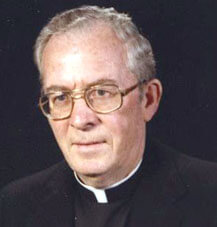 Nearly 70 years after he was ordained to the priesthood, Monsignor Myles McGowan is still completely devoted to his vocation. The oldest priest of the Archdiocese of Baltimore continues to celebrate Mass, hear confessions and help out whenever needed in local parishes.

The 94-year–old Irish priest will celebrate his 70th anniversary in the priesthood on June 17. His actual anniversary is June 20. In 1937, he was ordained in Dublin, Ireland, by Archbishop Michael J. Curley, who was a friend of the family, for the Archdiocese of Baltimore.

“I had a feeling I had a vocation and I wanted to pursue it,” said Monsignor McGowan who entered a missionary seminary after graduating high school at the age of 18.

After serving two years in Limerick, Ireland, the 26-year-old priest arrived at St. Gregory the Great, Baltimore, ready to serve and soak in American culture. Monsignor McGowan said one of the biggest challenges in his priesthood was the culture shock and slight language barrier.

“The people were very, very kind and forgiving and put up with me,” he said with a laugh. “My appointments were very good all the way through. That was certainly a bonus.”

After serving four years at St. Gregory the Great, Baltimore, Monsignor McGowan became a chaplain for the Air Corps, serving in the states and Italy for four years. After was then assigned to Immaculate Conception, Towson, as an associate pastor for 10 years. His first pastor assignment was at St. Joseph, Midland, where he served for a year and a half. He was then assigned to St. Louis, Clarksville, as pastor for 10 years before he became pastor of St. Ursula were he stayed for 22 years until he retired in 1988.

“Monsignor McGowan, as the oldest priest in the Archdiocese, reflects an understanding of the Church of three generations,” said Archbishop William D. Borders, who has been friends with Monsignor McGowan for 37 years.
“Obviously he has had the ability to adapt to the circumstances of the time because he believes deeply in the presence of the Holy Spirit and reaching out to the people of God despite some of the limitations that we all have.”
Monsignor McGowan said he doesn’t mind being the oldest priest in the diocese, noting with a wide smile that “it’s better than the alternative.”

“Archbishop Borders is about five or six months younger than me and I’m trying to keep him from being the oldest priest in the diocese,” he said with a chuckle. The two friends celebrate morning Mass together whenever possible.

Monsignor McGowan, who still has the slightly lilting accent of his homeland, said the priesthood has changed in many ways since he was ordained. When he came to Baltimore some 68 years ago there was a surplus of priests in America.

“In those days we had large families and now we have smaller families with one or two children and few are pointed toward religion,” said the devoted priest speaking on the need for more people to enter the religious life.

He said he didn’t have much trouble with any of the changes that were made during the Second Vatican Council. In fact, he said it made more sense to have the Mass in the vernacular because people could better understand and participate in the Mass.

“In retirement he still continues to offer service in parishes, especially in his last parish, St. Ursula and continues an outreach to people he has known down through the years,” said Archbishop Borders.

While serving at St. Louis and St. Ursula, Monsignor McGowan said he helped many young men discover their calling to the priesthood.

“Monsignor McGowan has given wonderful service as a priest in his many assignments over 70 years of priestly ministry,” said Cardinal William H. Keeler. “May the Lord continue to sustain him in health and God’s grace.”