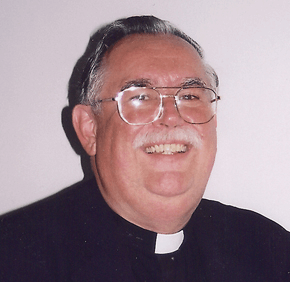 By George P. Matysek Jr.
gmatysek@CatholicReview.org
Twitter: @ReviewMatysek
UPDATED Dec. 17, 9:30 a.m. – When Monsignor Edward M. Miller arrived at St. Bernardine in West Baltimore 38 years ago, the young priest was charged with reviving a dying parish that then counted just 200 people on its registry.
“If you had shot off a cannon at church on Sunday,” Monsignor Miller told the Catholic Review in a 2011 interview, “you wouldn’t have killed or hit anybody. There was nobody here. They gave me five years. If it didn’t come around, they would close the parish.”
Monsignor Miller more than accomplished his mission, transforming the moribund parish into what is today the largest African-American Catholic church in the Archdiocese of Baltimore with approximately 1,500 registered families.
Monsignor Miller died suddenly Dec. 15 while making his way to the church to celebrate morning Mass. The news has shaken St. Bernardine parishioners, who regarded their 68-year-old pastor as an inspiration.
Monsignor Miller was widely respected for encouraging lay leaders to take ownership of the parish. He initiated dozens of evangelization and outreach programs to build up the wider community.
“The death of Monsignor Miller is a tremendous loss for the archdiocese, for the people of St. Bernardine’s and for the Catholic Church in Baltimore City,” Archbishop William E. Lori said in a Dec. 16 statement. “Monsignor Miller was wholly committed to the mission of evangelization, to bringing others closer to Christ, and spent 42 years of his life doing just that in West Baltimore.”
Baltimore Mayor Stephanie Rawlings-Blake said the city mourns the loss of Monsignor Miller, noting in a Dec. 16 statement that he “exemplified the fundamental elements of community – serving not just as a servant to the community, but as a servant of the community.”
The mayor added that “generations of parishioners, community leaders, neighbors, friends and the City of Baltimore will sorely miss his gentle giant presence.”
Coming from a religious family, with one sibling becoming a Christian Brother and another becoming a Holy Cross Brother, Monsignor Miller was educated at the parish school at St. Joseph’s Passionist Monastery in Irvington, St. James the Lesser School in Baltimore and St. Ursula School in Parkville. He then attended minor seminary at St. Charles in Catonsville. He continued his studies for the priesthood at St. Mary’s Seminary on Paca Street and St. Mary’s Seminary and University in Roland Park. He was ordained in 1971.
He first served at St. Ambrose in Park Heights before being transferred to St. Bernardine in 1975. There, the priest was part of an experimental “shared ministry” approach to parish leadership, working with another priest. He was named sole pastor in 1980.
“He was everything to us, said Denise Stanley, St. Bernardine’s administrative assistant. “He cared about everyone and he knew everyone. He was my other father.”
Beverly White, St. Bernardine’s director of religious education, noted that Monsignor Miller made sure parish leaders received ongoing education and formation. White benefitted from that approach, receiving advanced training at Xavier University in New Orleans. Others were sent to St. Mary’s Ecumenical Institute at St. Mary’s Seminary and University in Roland Park, archdiocesan workshops and other programs.
“He always had a way of encouraging people,” White said. “We embraced his vision.”
Monsignor Miller was a strong proponent of St. Bernardine School, which was one of 13 schools that closed in 2010 as part of an archdiocesan strategic plan for Catholic education. The school’s closure was the saddest moment of his tenure at St. Bernardine, White said.
Deacon Wardell P. Barksdale said Monsignor Miller was the “personification of love,” a man “willing to go the extra mile to pick up people who were beaten down.”
Monsignor Miller, who was acting director of the archdiocesan Urban Commission from 1977 to 1980, was known in the neighborhood by Catholics and Protestants alike, Deacon Barksdale said. The pastor instituted a practice of offering funeral services for anyone who requested them.
“He said his only restriction was that you had to be dead,” Deacon Barksdale remembered. “He buried a lot of the community people when they didn’t have a church. It was a service to the families and also good evangelization.”
John Hancock remembered Monsignor Miller from the pastor’s seminarian days at St. Mary’s on Paca Street. At Hancock’s West Baltimore home, the seminarian taught catechism classes for children of the city’s Immaculate Conception Parish.
“It was hard to walk those streets in those days,” said Hancock, who is no longer Catholic. “He wasn’t afraid to do it. He taught us about the faith and about the world.”
Hancock remembered that his mother cooked for the future priest and other seminarians, and that Hancock’s father converted to Catholicism after being inspired by the future priest.
“He did a lot for my family,” Hancock said. “I have nothing but respect for him.”

Among the numerous outreach programs Monsignor Miller supported at St. Bernardine were a sister parish in Haiti and a school in Nairobi. Locally, St. Bernardine was a founding member of the 40 West Outreach Center. The church is home to a food pantry, meeting space for those suffering with addictions, health fairs and more. An evangelization committee visits people in the community door-to-door several times a year.

Stanley noted that Monsignor Miller was known for rousing homilies that could last an hour or more.
“He said that St. Bernardine was known for speaking for a long period of time,” Stanley recalled. “He felt he had to do the same. The people really enjoyed that.”
In a 2011 interview with the Catholic Review, Monsignor Miller said his lifelong call to the priesthood was an “incredible gift.”
“It’s got its moments of sorrow,” he said, “but just helping people come to know the Lord, deepen their faith and change their lives is incredible. God is using you for his kingdom and to do his work.”
A viewing will be held Dec. 18 at St. Bernardine from 3 to 7 p.m., followed by a wake service. Archbishop Lori will celebrate the funeral Mass at the Cathedral of Mary Our Queen in Homeland on Dec. 19 at 11 a.m.