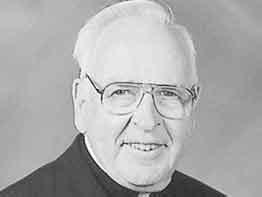 A funeral Mass will be offered March 5 for Monsignor James J. Cronin, a beloved pastor whose Irish wit and concern for his parishioners made him immensely popular.

Monsignor Cronin, who had suffered a stroke in 2006, died at Stella Maris on Feb. 29. He was 88 and had been a priest for 63 years. For a man who loved to adopt a brogue and was the life of the party, it was fitting that he was ordained on St. Patrick’s Day in 1945.

Everywhere he went, people knew him – even on a trip to Montreal, recalled Father Kevin Schenning, pastor of St. Joseph, Fullerton.

“He just had an openness to everyone – the poorest person to the richest person, he treated everyone the same,” Father Schenning said. “He made the little things important, and everyone remembered that.”

The fifth of eight children, Monsignor Cronin was born in Glen Falls, N.Y. Two of his brothers became priests, and one of his sisters became a nun. After three years at St. Michael’s College in Toronto, Monsignor Cronin came to St. Mary’s Seminary College on Paca Street because his older brother, Father John Cronin, S.S., was a professor there.

After a year, he transferred to St. Mary’s Seminary, Roland Park, where he completed his formation. His ordination took place in Albany, N.Y., so that his elderly mother could attend.

Monsignor Cronin was assigned to St. Ursula, where he served as associate pastor for 19 years. He then moved to St. Lawrence, Baltimore, in 1964 and was named moderator of the Chi-Ro Council for the Catholic Youth Organization. In 1967 he was named pastor of St. Bernardine Church, Baltimore, and coordinated the Urban Commission for the Western Area, where he addressed the challenges facing the city and the nation.

In 1970, for health reasons, he accepted a temporary assignment at St. Margaret, Bel Air. Later that year he was named pastor of the recently founded St. Isaac Jogues. In 1982, Pope John Paul II named Father Cronin a Prelate of Honor with the title of monsignor.

He dined out regularly with fellow priests, and “he would invite someone else, an outsider,” recalled Father Schenning. “That’s why the priests would love him.”

In 1994, Monsignor Cronin retired as pastor, and theoretically retired from active ministry. But while living at St. Joan of Arc, Aberdeen, and then at St. Joseph, Fullerton, he regularly celebrated Mass, heard confessions, performed weddings and celebrated anniversaries.

“He touched our lives,” he said. “He really made you feel like you were a part of the church, and Christ loves you.”

Messages of condolences and Mass cards can be sent to Father Kevin Schenning, St. Joseph Church, 8420 Belair Road, Baltimore, MD 21230. In lieu of flowers, memorial contributions can be made to Catholic Relief Services or the Capital Campaign Fund of St. Isaac Jogues Church.