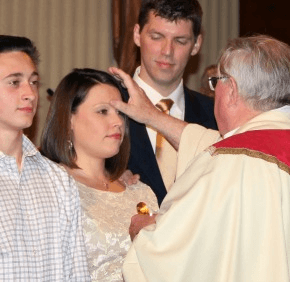 By Elizabeth Lowe
elowe@CatholicReview.org
Heather Mewshaw experienced what she described as an amazing moment of prayer after she received the Eucharist for the first time April 19.
“I felt like Jesus’ arms were holding me,” said Mewshaw, 34, a parishioner of Our Lady of the Fields in Millersville. “It was a really powerful moment in prayer and something I’ll never forget.”
Mewshaw was among the more than 750 new Catholics received into the church April 19 at Easter Vigil Masses throughout the Archdiocese of Baltimore, according to Ximena DeBroeck, coordinator of adult and sacramental formation for the archdiocese.
A total of 252 catechumens, those who have not been baptized, and 500 candidates, such as Mewshaw, those who have been baptized but have not received the sacraments of Communion and/or confirmation or those from another Christian tradition who desire to be Catholic, entered the church, according DeBroeck.
Last year, 113,500 people entered the Catholic Church in the United States, according to information from the archdiocese. The Archdiocese of Washington welcomed 1,306 new Catholics, the largest number of candidates and catechumens in its history, according to the U.S. Conference of Catholic Bishops.
Mewshaw said the Holy Spirit guided her decision to enter the church.
“I feel like God has led me all this way,” Mewshaw said. “I discerned a lot, is this really right for me? Now that I’m open and embracing it I can definitely see this was the right choice.”
“She (Mewshaw) is excited to come into the church,” Monsignor Jay O’Connor, pastor of Our Lady of the Fields, said before the Easter Vigil.
Mewshaw hails from a family with Catholic roots. Her parents, both of whom are deaf, were raised Catholic and married in the church but stopped attending Mass.
Mewshaw was baptized at a Baptist church in Glen Burnie at age 12 and attended non-denominational Christian churches as a young adult.
It was when Mewshaw started dating her husband, Doug, a Catholic, that she began attending Mass. Six years later, the couple was married at St. Bernadette in Severn.
When they decided to have children, Mewshaw experienced fertility issues and had five miscarriages. Tests showed miscarriages would be inevitable, Mewshaw said. After that, the couple began attending Mass regularly. Within a month, Mewshaw was pregnant. Their daughter, Stella, was born in May 2012.
“She (Stella) is by far the greatest blessing that God could ever give us and one of the reasons why I became Catholic,” Mewshaw told the Catholic Review. “After baptizing her at 3 weeks old, I wanted to learn more about what I was supposed to be teaching her in the Catholic tradition.”
Mewshaw described the moment during the Easter Vigil when she was anointed with the holy chrism, a mixture of olive oil and balsam fragrance used to anoint the newly baptized, to seal candidates for confirmation and anoint the hands of priests and the heads of bishops at their ordination.
“The chrism oil smells so good,” she said. “I had to breathe it in. It’s a really special moment.”
Now, as a member of the church, Mewshaw said she feels transformed.
“I feel renewed in a way,” she said. “It’s pretty cool to say that I’m Catholic. Now that I am Catholic and I have a faith or religion I belong to, I feel like I want to bring others in (to the faith). I hope that I can be a good example.”
Mewshaw, a professional sign language interpreter, plans to get involved with Our Lady of the Fields’ deaf ministry.
“I’m hoping to contribute in any way I can,” she said.
Also see:
Easter proclaims that love gives life, pope says
Parishes observe Holy Week with Easter traditions
PrevNext