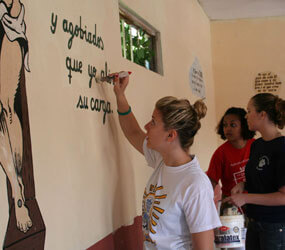 CHIMBOTE, Peru – Rachel Roa had visited Peru before, but on a trip with fellow U.S. university students she discovered her parents’ homeland in a new way.

“I see the tourist sites when I come with my parents,” Roa, 21, told Catholic News Service, but the visit to shantytowns, a hospice and a low-income parish off the tourist trail “let me see a different side” of the South American country.

In a matter of days, the nine students from Misericordia University in Dallas, Pa., met women whose lives revolve around waiting for the water truck to arrive; were mobbed by schoolchildren who wanted to touch their fair skin; received a warm welcome from women in a shantytown; and helped a group of confirmation students clean and paint their parish center.

They learned as much about themselves as about Peru and returned to Pennsylvania determined to stay connected with the people they had met.

“There’s no better way to learn about a culture than to be out of your element,” said Julianne Curry, 19, a speech language pathology major from Washington Township, N.J. The experience in Peru was “different from what you’d see on TV,” she said.

It was also a chance to encounter God in a new way.

“Young adults are searching for God. Part of our job is helping them connect with God in everyday experiences,” said Christine Somers, 41, Misericordia University’s campus ministry director, who organized the trip and accompanied the group. “We help them grow in spirituality.”

While most of the students had participated in service trips in the United States, including helping rebuild homes in New Orleans after Hurricane Katrina, many had not traveled abroad. A few were nervous about the trip to Peru, because instead of doing a specific task, they would be immersing themselves in other people’s lives.

They learned that relationships are as important as service and that it is crucial to listen to people before taking action.

“We have a lot of resources, but if we don’t know what people need,” those resources cannot be used effectively, said Roa, an accounting major from Lancaster, Pa., where her family belongs to San Juan Bautista parish.

The trip also gave the students a close look at the work of the Mercy Sisters, who founded Misericordia.

“I’d like to see them go back and make life decisions out of this, to choose careers that can be somewhat free of the materialistic environment they live in,” said Sister Deborah Watson, 65, a Mercy Sister from Burlingame, Calif., who hosted the group in Lima, the Peruvian capital, and Chimbote, a fishing port on the north-central coast.

After making home visits with hospice workers in Chimbote, Andrew Roccograndi, 20, a nursing student from Kingston, Pa., said the trip reaffirmed his decision to study nursing and gave him new insight into the problem of poverty.

“The least we have is more than the most they have,” he said of the families he visited. “We should be appreciative of what we have, even if it’s not a lot.”

Despite the poverty, however, the students found the Peruvians they met welcoming and hospitable.

Lauren LaSala, a 20-year-old speech language pathology major from Denville, N.J., and several classmates visited a family in a dirt-floor shack with straw mats for walls and the roof. A member of the family had just celebrated a birthday, and the mother welcomed the students warmly and offered them bowls of “mazamorra,” a pudding-like desert made from fruit and purple corn.

The students were hesitant, knowing the family had little money for food, but when they finished, the woman filled their bowls again.

“They have so little, but they’re so giving,” LaSala said.

The students said they realized that poverty limits people’s lives.

“We always say anybody can do anything if they work hard enough,” said Jill Rafferty, 22, a physical therapy major from Rome, Pa., where she belongs to Epiphany Parish in nearby Sayre. But she and other students fear that some dreams may be out of reach for the young Peruvians they met.

At an elementary school they visited, children said they wanted to grow up to be doctors or lawyers, LaSala said, but the odds are against them in a country where people must struggle just to get water and electricity in low-income neighborhoods on the edges of cities like Lima and Chimbote.

“One of the things that surprised me was that (so many) people don’t have running water,” Curry said.

In a shantytown in Los Olivos, on the northern edge of Lima, the students visited Mercy Sisters who manage a clinic and help women find ways to earn money to support their families. The public water system has not reached that neighborhood, so every few days the women gather their buckets and wait for the water truck.

Besides suffering inconvenience, families in low-income neighborhoods pay four or five times as much for water from trucks as residents of wealthier districts pay for water from the public system.

“Each person can learn something if they’re open to learn from the devastating poverty” in much of the world, said Caity Bryson, 22, a physical therapy major from Gettysburg, Pa. Bryson gave the Mercy Sisters $1,160 collected from her home parish of St. Francis Xavier for projects in Peru.

By the end of the 10-day trip, the students were talking about how to share what they had learned with their peers at school and at home and practical ways of helping the people they had met, such as selling handicrafts made by the women with whom the Mercy Sisters work.

Somers said making those connections was one goal of the trip.

“They go back with a different perspective – they try to live simpler, and they become more aware about the world. The important thing is they go back and educate their friends,” she said.