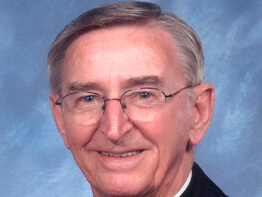 WASHINGTON – Pope Benedict XVI has accepted the resignation of Bishop Victor H. Balke of Crookston, Minn., and appointed as his successor Monsignor Michael J. Hoeppner, vicar general of the Diocese of Winona, Minn.

The announcement came one day shy of Bishop Balke’s 76th birthday. He submitted his resignation when he turned 75 last September. Canon law requires all bishops to submit their resignation to the pope when they turn 75.

Bishop-designate Hoeppner, 58, will be ordained and installed as the seventh bishop of the Diocese of Crookston Nov. 30.

“I know the people and the clergy of the Diocese of Crookston will welcome him with open arms and work with him to build up the church of Crookston,” he said.

Ordained to the priesthood for the Diocese of Springfield, Ill., in 1958, Bishop Balke had headed the Minnesota diocese since 1976. The Crookston Diocese has a Catholic population of 35,780 out of a total population of about 251,000.

With Bishop Balke’s retirement, there are now only three active U.S. bishops who owe their current appointment to Pope Paul VI. They are Bishop Howard J. Hubbard of Albany, N.Y., and Auxiliary Bishops Kenneth D. Steiner of Portland, Ore., and Peter A. Rosazza of Hartford, Conn.

Bishop Balke served on several committees of the U.S. Conference of Catholic Bishops and recently completed his second three-year term on the Administrative Committee. He is also past chairman of the American Board of Catholic Missions, now known as the Committee on the Home Missions.

Bishop-designate Hoeppner was born June 1, 1949, in Winona. He attended elementary school, high school, college and seminary all in Winona, but he studied theology at the Pontifical North American College in Rome. In 1975, he was ordained to the priesthood for the Diocese of Winona by Pope Paul VI at St. Peter’s Basilica in Rome.

The bishop-designate holds a degree in sacred theology from the Pontifical Gregorian University in Rome and has a licentiate in canon law from St. Paul University in Ottawa. He also earned a master’s degree in education from Winona State University.

After his priestly ordination, he served as pastor in several parishes in the Winona Diocese, was a chaplain to the School Sisters of Notre Dame in Mankato, Minn., and has been a chaplain for a hospice in Lyle, Minn. He also has taught in local Catholic high schools and at the Immaculate Heart of Mary Seminary in Winona.

At the diocesan level, he not only served as the vicar general, but also as judicial vicar, director of vocations, director of continuing education for the clergy and moderator of the curia.