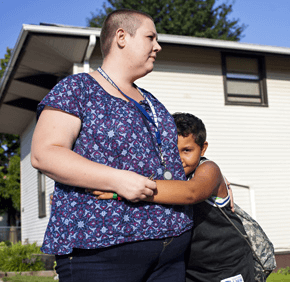 By Maria Wiering
mwiering@CatholicReview.org
Twitter: @ReviewWiering
FORT MEADE – Kali Radke said she would be fine with “a crappy apartment” – something cheap and small, but affordable.
However, that’s out of reach for minimum-wage earners, she said, even if they work full time.
“People just assume (minimum wage) is enough to get by,” she said. “Here (in Maryland), even the apartment with the roaches and bedbugs, you have to make $14 an hour to afford it.”
Stories such as Radke’s demonstrate an economic injustice, according to the U.S. bishops.
In anticipation of Labor Day, Bishop Stephen E. Blaire of Stockton, Calif., called for more jobs to pay “a living wage” – a rate most consider to be much higher than the $7.25 per hour federal minimum wage, which is also Maryland’s minimum wage. Tipped workers, such as waiters, make a minimum of $3.63 per hour before tips.
“The pain of the poor and those becoming poor in the rising economic inequality of our society is mounting,” said Bishop Blaire, chairman of the U.S. Conference of Catholic Bishops’ Committee on Domestic Justice and Human Development, in its annual Labor Day statement. “Let us renew our commitment to promote the dignity of the human person through work that is honorable, pays just wages and recognizes the God-given dignity of the working person.”
According to the Working Poor Families Project, which Bishop Blaire cited when testifying before Congress in June, the United States is home to 10.4 million low-income working families.
Radke, 31, makes $8.25 per hour at a women’s retail outlet store at Arundel Mills in Hanover, working 10 to 25 hours per week. Full-time hours aren’t available, she said. To compensate, she arrives early, stays late and regularly picks up shifts when co-workers can’t make it, in an effort to make as much as she can, she said. Her biweekly paycheck is often less than $300 after taxes.
Radke was working and going to school in Texas but moved to Maryland last year to be closer to family. After briefly experiencing homelessness, she and her 9-year-old daughter, Taylah Walker, found refuge at Sarah’s House, a Catholic Charities supportive housing program in Fort Meade.
Like others making near-minimum wage, Radke relies on public assistance to bridge the gap between her earnings and her needs. She doesn’t have a car, so she rides the bus from her home in Fort Meade to Arundel Mills. She could drive the distance in less than 10 minutes, but public transportation takes more than an hour.
Radke only has one job, but she knows others who cobble together multiple part-time jobs to make ends meet. Increased commuting means lost income, adding yet one more challenge for the working poor.
Part-time workers are often ineligible for company benefits.
The federal minimum wage was codified 75 years ago in the Fair Labor Standards Act and has been increased 22 times, most recently in 2009. According to the U.S. Department of Labor, the federal minimum wage hit its peak purchasing power in the 1960s with a wage that would have been equivalent to more than $10 per hour today.
A full-time worker making minimum wage earns $14,500 a year. At a May roundtable held at Our Daily Bread Employment Center in Baltimore, Acting U.S. Secretary of Labor Seth D. Harris estimated that 15 million workers would benefit from an increase in the federal minimum wage.
In 2007, Maryland Gov. Martin J. O’Malley signed the nation’s first living wage law, boosting the base pay rate for most workers with Maryland state contracts. The rate is set to increase Sept. 27 to $13.19 or $9.91 per hour, depending on jurisdiction.
Fast-food workers nationwide are drawing attention to their low wages – an average of $9 per hour – with one-day strikes. In July, workers in multiple cities walked off the job with demands to boost their base pay to $15 per hour. Another strike is being planned for Aug. 29.
According to a 2012 study prepared for the Maryland Community Action Partnership, a single adult would have to earn an hourly wage of $10.71 in Baltimore City and $14.31 in Baltimore County to meet self-sufficiency standards – meeting basic needs without public or private assistance.
In Anne Arundel County, where Radke lives, the estimated self-sufficiency wage is $16.54 per hour for one adult. It jumps to $26.36 per hour for an adult with a school-age teen.
Counselors at Career Connections, a St. Vincent de Paul program in Baltimore City, aim for clients to land jobs that pay at least $12.50 per hour. They focus on job-seeking skills such as writing résumés and cover letters, interviewing and professional conduct.
The program helps people find jobs in a variety of areas, but directs some searchers toward health care, child care and food service – three areas with projected growth in Baltimore. Food service is especially forgiving of applicants with criminal backgrounds or without high school degrees – frequent employment hurdles, said Regina Brown, a career development specialist.
Confidence is one of the greatest factors in low-wage earners’ ability to find better paying jobs, she said. Some of her clients have never imagined what life could be like if they were able to earn better than minimum wage.
“So many people who come in here don’t have a good image of themselves,” Brown said.
Radke is on track to a brighter future for herself and her daughter. She is taking classes toward nursing assistant certifications at Anne Arundel Community College in Arnold – a five-hour round trip by bus. She hopes to join the staff of Baltimore Washington Medical Center in Glen Burnie before working toward a four-year nursing degree.
Some critics of a minimum wage increase allege that a wage hike could cause employers to hire fewer people, or that a few dollars aren’t enough to make a real difference.
Radke, however, who has heard the concerns, said “just not doing anything is not the answer.”
See also:
Living in car with sons, Detroit woman embodies city’s challenges
PrevNext