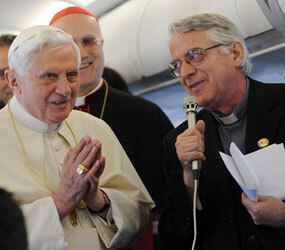 VATICAN CITY – When he visits Great Britain in mid-September, Pope Benedict XVI will be shadowed by a roster of aides who ensure smooth sailing for the 83-year-old pontiff whenever he travels abroad.

This “mini-Vatican” is small enough to fit on his chartered jet, but diverse enough to respond to challenges in strategic areas – including diplomatic crises, security breaches, liturgical snafus, reporters’ questions and even medical emergencies.

Many of the key players on the Vatican’s traveling team are veterans with on-the-road experience going back decades. But the plane to Britain will also carry at least one “rookie” making his first papal trip.

Probably the most visible figure on the papal plane is the one standing next to him when the pope answers reporters’ questions: Father Federico Lombardi, the Vatican spokesman. Father Lombardi, a 68-year-old Jesuit, has had his share of public relations ordeals during papal trips, beginning with the pope’s speech on Islam in Regensburg, Germany, in 2006.

The pope’s off-the-cuff comments on his plane have also ignited public debate, on topics ranging from Marian apparitions to condoms. Although the questions on these flying news conferences are now pre-selected from reporters’ submissions, Father Lombardi apparently tries not to over-vet.

Cardinal Tarcisio Bertone, the Vatican secretary of state, is never far from the pope’s side throughout foreign trips, and takes part in many of the private meetings with political and state leaders. Cardinal Bertone doesn’t speak much English, and assisting him on this visit will be 49-year-old Monsignor Leo Cushley, a Scot who heads the secretariat’s English-language desk.

In addition, because this is a state visit, the pope is bringing along Archbishop Dominique Mamberti, the Vatican’s secretary for relations with states, who routinely deals with the details of foreign relations.

Monsignor Georg Ganswein, Pope Benedict’s personal secretary, is well-known to TV viewers around the world as the sandy-haired prelate who ushers the pope to his seat, hands him his texts and generally keeps an eagle eye out for the pontiff when he’s on the public stage.

Another familiar figure on the papal-trip landscape is Alberto Gasbarri, the Vatican Radio official who organizes the pope’s foreign visits. Gasbarri, who has been doing this since the early days of Pope John Paul II, is the elegantly dressed layman who typically precedes the pope by about 10 steps – all the better to make sure there are no logistical surprises around the corner.

Domenico Giani, the head of Vatican security, has got to be the most pressured man on papal trips. Security is provided by the host country, but Giani’s role is to coordinate the interface between the British team and the handful of Vatican agents who travel with the pope. Wearing suits and ties, Giani and his men flank Pope Benedict whenever he moves, then fade into the background.

One member of the papal entourage who is rarely seen is Dr. Patrizio Polisca, the pope’s personal physician. He’s essentially on call 24/7 for the duration of the trip. Polisca, however, has another particular interest in this visit: as president of the group of physicians who advise the Vatican Congregation for Saints’ Causes, he had a role in approving the miracle needed for the beatification of Cardinal John Henry Newman – the key event of the trip.

Archbishop Kurt Koch, the new president of the Pontifical Council for Promoting Christian Unity, will be traveling for the first time on a papal trip. Although there are obvious ecumenical aspects to the visit, don’t look for Archbishop Koch to take center stage: Vatican sources view the trip as a chance to spotlight the need for common Christian witness, not as a working session on ecumenical problems.

An assortment of about 20 other officials completes the Vatican roster on the papal plane. The papal aides sit in front, and the 70 or so reporters accredited for the flight sit in coach class – a hierarchy that hasn’t changed in more than 40 years of papal travel.