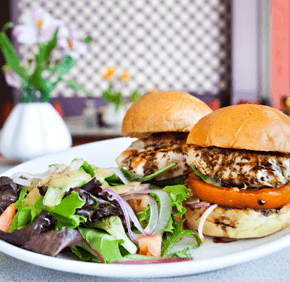 Conversion – in faith or in the food business – transforms us inside and out. That’s what Zandi’s Grill in Millersville experienced.

Obscurely located in the back of a business plaza, near my new assignment as associate pastor of Our Lady of the Fields, Zandi’s once-failing restaurant received an extreme makeover by Food Network’s muscled, meaningfully-meal-minded-superstar-chef, Robert Irvine, in his hit show “Restaurant Impossible.”

Irvine transformed the restaurant and its owners with just $10,000 and 48 hours. It’s rather dramatic seeing how the change of heart is often more difficult than physical changes of the space. But, both are needed in a true conversion.

Zandi’s has about 15 tabletops and a bar area that seats about 12. Bright colors, modern fixtures and a signature eye-catching wall design create a whimsical place for breakfast or lunch – the only meals served. The layout restricts groups or large families, but it’s ideal for singles or couples.

Steadfast time slots for breakfast and lunch restrict the menu choices. Brunch is not an option, and this presented challenges in evaluating their food. I was just too late to get an omelet. That was disappointing – especially since an omelet featured on the show is easy to make, but also easy to mess up. The polite waitress apologetically explained how the kitchen was too busy, even though the restaurant was only half-filled when I arrived.

The dishes I ordered were well prepared and flavorful, even if the signature burger (bacon and blue cheese with a fried egg) was overcooked, not medium rare as requested. Hand-cut fries, a flavored aioli, creamy crab-cake appetizers seared on a griddle and the tilapia sliders were tasty and appropriately priced. However, it took 30 minutes to arrive. The milkshake, also featured on the show, was typical, but provided a sweet ending.

My biggest concern was the slow service. While the solo waitress and one of the owners were polite and friendly, they seemed frazzled and unprepared – not an uncommon experience according to online reviews. It is obvious that they need more staff, especially since the Food Network show gave them much-needed exposure and a boost for success – busyness!

The show revealed how the owners lacked passion in their approach before the renovation. My experience at Zandi’s indicated an ongoing need for conversion in this area. But, it’s understandable, since a conversion of heart and a change of old ways don’t happen in just 48 hours, but a lifetime.

I enjoyed visiting Zandi’s, especially since I’m a fan of Chef Irvine’s show. I wish them well. But this experience reminded me that conversion doesn’t come instantly. Like this restaurant, our faith communities need to be ready to serve the hungry crowds. If we aren’t ready, they will go elsewhere. And, if our churches aren’t packed on Sundays – like a good restaurant – then perhaps we may need ongoing conversion ourselves: a transformation inside and out. And Zandi’s proves it is possible.

Thanks for your ongoing suggestions for future Culinary Confessions. Let us know of a restaurant that you think I should review. Email suggestions to FrLeo@CatholicReview.org