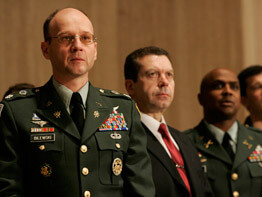 WASHINGTON – Archbishop Timothy P. A. Broglio was installed Jan. 25 as the Archbishop for Military Services, USA at the Basilica of the National Shrine of the Immaculate Conception, Washington.

As leader of the church’s largest diocese geographically – one that encompasses wherever Americans in the military and their families are stationed – Archbishop Broglio will shepherd more than 1.4 million Catholics.

Walking below gold ceilings and brightly colored mosaics, cardinals, bishops, priests and deacons processed into the basilica. In the pews the elaborate colors of the Knights of Columbus, the Sacred Military Constantinian Order of St. George, The Equestrian Order of the Holy Sepulchre of Jerusalem and the Sovereign Military Hospitaller Order of St. John of Jerusalem, of Rhodes, and of Malta vied with the bright array of medals on the dress uniforms of all of the branches of the armed services.

Baltimore’s cardinal, archbishop and bishops joined in the procession.
In his homily, Archbishop Broglio said it was most appropriate to inaugurate this ministry on the feast of the Apostle Paul’s conversion.

“While Paul might or might not have fallen off a horse on his way to Damascus, I will certainly spend a considerable amount of time in airports and in transit. He was a great missionary to the nations, and this new ministry obliges me to go and seek out our faithful men and women in the (U.S.) armed forces and their families, wherever they may be.”

Archbishop Broglio is no stranger to travel, having served in the Vatican Diplomatic Corps as secretary of the Apostolic Nunciature in Abidjan, Ivory Coast, and in Paraguay. In 1990 he returned to Rome to serve as the chief of cabinet for Cardinal Angelo Sodano, secretary of state to Pope John Paul II. In 2001 he was named archbishop and apostolic nuncio to the Dominican Republic and apostolic delegate to Puerto Rico.

He succeeds Archbishop Edwin F. O’Brien, who led the military archdiocese for 10 years until he was appointed archbishop of Baltimore.

Archbishop Broglio turned to Archbishop O’Brien during the homily and said, “I appreciate your sacrifice to be here this afternoon. When I met you 32 years ago, I was impressed, but I never, ever thought about being your successor. I am grateful for the legacy you have left, the ministry you so ably accomplished, and the home that you provided for the archdiocese. I hope to follow the example of your ubiquity and selflessness in generous service. Given that Baltimore is not far away, I’m also counting on your counsel.”

After the Mass, he praised Archbishop O’Brien for his presence among the military men and women.

“He made an effort to be with the troops,” Archbishop Broglio said. “He was selfless.”

Archbishop O’Brien told The Catholic Review via e-mail, “I have known Archbishop Broglio for many years and I consider him a personal friend. His priestly approach to his work, as well as the respect and friendships he has made among those in the hierarchy of the Church, his brother priests, and those in the diplomatic community, will serve him well in his new position.”

When asked about taking over when the country is at war, he said, “It certainly makes it more somber, and I think, too, it’s a cause for concern. War is always the last resort. I spent the last 24 years as a diplomat in dialogue, and the dialogue is to avoid war.”
Although he personally has no military experience, his father was an army doctor in World War II and his oldest brother served as an army doctor from 1973 to 1977. Archbishop Broglio, who is from Cleveland, is one of five children, and his family was on hand Friday.

As he begins his ministry, his immediate goal is to secure more chaplains for the military, which are desperately needed.

Lt. j.g. Father David Daigle, a priest from the Diocese of Bridgeport and a U.S. Navy chaplain stationed on the U.S.S. Iwo Jima, said he found the Mass “uplifting and a wonderful display of pastoral dedication … every time I say Mass or hear confessions I’m doing it in union with the archbishop so it was nice to meet him.”

Lt. Col. Thearon Williams, stationed in Washington, D.C., said he attended the Mass because he’s an active Catholic who believes the military archdiocese best understands what military members and their families go through.

“Having attended Mass on military installations, I see the benefits of the archdiocese,” Lt. Col. Williams said. “I’m very happy to be able to take time to come and acknowledge what they’ve done for me and my family.”