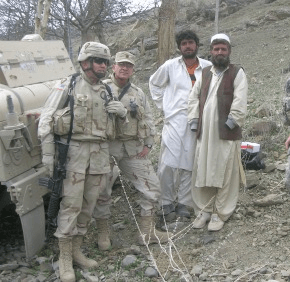 SAN JUAN, Texas – Master Sgt. Pablo H. Villescas was serving with the Army Reserve in Afghanistan when that country held its first free, direct elections in 2004.

More than three-quarters of Afghanistan’s registered voters cast ballots in the election.

He added that some Afghans were also killed so they couldn’t vote.

In the United States, where there are few, if any, barriers to the polls, voter registration and voter turnout is low. In the 2012 U.S. presidential election, only 53.6 percent of eligible voters cast a ballot, according to the Pew Research Center.

“It really bothers me when people don’t vote,” Villescas told The Valley Catholic, newspaper of the Diocese of Brownsville. “A lot of people have given their lives so that we can have that opportunity and it is not appreciated.”

The Fourth of July is a day of celebration, but it is also an ideal time to reflect on our freedoms and the sacrifices our service men and women have made to sustain them — men like Villescas.

Villescas, 60, serves as the administrator of the Basilica of Our Lady of San Juan del Valle-National Shrine, where he has been employed for 45 years.

“I started working here in August of 1970,” said Villescas, now retired from the reserves. “I was in high school and my first job was as a dishwasher in the cafeteria.”

From there, Villescas was promoted to cashier and then worked in the gift shop, the mailroom and the hotel, just to name a few of his posts. Later, he began learning the administrative side and was responsible for purchasing and acquisitions.

“Even before he stared working here, he was an altar server at the church and a student at the school so that means he has spent his whole life here,” said Father Amador Garza, rector of the basilica. “He’s an invaluable resource because he is the institutional memory for the basilica after all these years here.

“When Bishop (Daniel E. Flores) asked me to be the rector, I knew right off the bat I wanted Pablo to be the administrator.”

Villescas was named administrator in 2010, after his last overseas tour with the Army Reserve. He manages a staff of 95. The basilica welcomes more than 25,000 pilgrims a week.

Villescas’ family was instrumental in establishing a shrine to Our Lady of San Juan in the Rio Grande Valley. In the 1940s, Villescas’ grandparents, Bernardino and Bernadina Villescas, petitioned Father Jose Maria Azpiazu, a priest of the Missionary Oblates of Mary Immaculate, to build a shrine for those who could not travel to Mexico.

Villescas said he believes Mary kept him safe during his overseas tours.

“There were times when I thought I was going to die,” he said. “Through all of those incidents, I was able to come back home. I feel like la Virgen protected me. She has always been our family’s patron saint.”

A native of San Juan, Villescas is the fifth of Fortino and Ninfa Villescas’ 10 children. He and his wife, Olga, have been together for 20 years. He also has three daughters, a son and eight grandchildren.

It was his father who inspired him to retire.

Through his father, Villescas learned how much heartache the family members of those who serve in the military endure.

“My father was sick and in the hospital and he asked me, ‘When are you are going to get out?'” Villescas recalled. “‘Well, I’m tired,’ my father said. ‘I’m tired of worrying about you, I’m tired of lighting candles for you.’

“It was painful for me to leave the Reserves, but the way it was requested, I couldn’t say no to my father. This applies to all service men and women. … All your loved ones are worried until you get home safely. More than 10,000 candles are lit at the basilica on any given weekend and I know many of those are for our military.”

His experience with the Catholic Church and the military have impacted his life’s work.

“In large measure, he owes his life to the church and to the Army,” Father Garza said. “They were the ones that shaped him and have molded him into who he has become. His whole life has been at the service of these two institutions, which have given him the sense of commitment and the sense of discipline that he has.”

Spiritual milestone: Parishioners make one million rosaries for members of the military