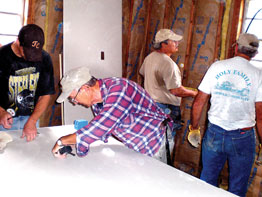 A team of volunteers from the Holy Family Catholic Community in Middletown is helping a New Orleans parish ravaged by Hurricane Katrina get back on its feet.

Twelve parishioners, including four teens, just returned from a weeklong trip to St. Gabriel in New Orleans, where they helped restore the rectory, completed parish landscaping and installed sheetrock in a parishioner’s home that was devastated by the hurricane.

St. Gabriel is a middle-class African-American faith community located in an area of the city that was under up to eight feet of water for about a month following Katrina. Many parishioners’ homes were completely destroyed and 650 families were displaced by the hurricane, according to Deacon Greg Rausch, one of the Holy Family volunteers.

“There is a tremendous problem with mold,” said Deacon Rausch, noting that on two earlier trips to New Orleans, Holy Family parishioners helped clear out moldy materials from the church and homes. They also hung wallboards, rebuilt walls, laid floor tiles and painted in seven homes.

During the most recent trip, which began Nov. 5, Holy Family volunteers slept in bunk beds in an old parish school classroom and cooked their meals in the church. They showered in makeshift showers in the old parish hall, Deacon Rausch said.

The Holy Family-St. Gabriel partnership was the brainchild of the Frederick County parish’s social justice committee. Not only have parishioners contributed sweat equity, they have also raised more than $40,000 in direct donations and income from the Cardinal’s Lenten Appeal to support St. Gabriel and New Orleans parishioners.

The volunteers restored two homes in Middletown for the use of Katrina victims living in the Frederick area, Deacon Rausch said. The homes were provided to needy families free of charge for six months.

In a written reflection published in the Holy Family social justice newsletter, many volunteer workers said they were inspired by the strong faith shown by New Orleans Catholics. Tim Moore recalled that he constantly heard Katrina victims say they were “blessed.”

“I could not understand how these folks, people who lost everything, people duped and swindled by contractors, people left unsupported by a government which cannot keep pace with the devastation, could keep moving forward,” Mr. Moore said. “But they all smiled! I did not meet one bitter person.”