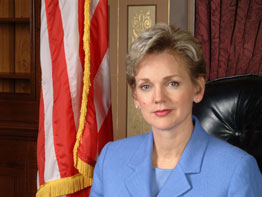 Paul A. Long, vice president for public policy at the Lansing-based public policy agency for the Michigan Catholic bishops, praised the Michigan House for its 74-32 vote May 27 in favor of the legislation, which the Senate had approved by a 24-13 margin in January.

The legislators who voted for the bill “deserve praise for outlawing a procedure that exemplifies just how far-reaching and out of touch the abortion issue has become,” Mr. Long said in a May 27 statement. “Today’s vote is a victory for those who have spent several years working to uplift the dignity of women and the human rights of the unborn by ending the atrocity known as partial-birth abortion.”

Granholm spokeswoman Megan Brown told Catholic News Service May 29, however, that “the governor will veto the bill when it comes to her desk.”

Ms. Brown said the governor believes the legislation is “politically motivated and unnecessary, given that there is a federal ban” on partial-birth abortion. She also is concerned that it “does not take into consideration the health of the mother,” the spokeswoman said.

The Michigan legislation would permit partial-birth abortion only if the birth of the child would threaten the life of the mother.

In 2003, her first year in office, Granholm, who is Catholic, vetoed the Legal Birth Definition Act, which would have banned partial-birth abortions by giving full legal status to a child in the process of being born as soon as any part of his or her body emerges from the mother.

At that time, the governor said she did so “because federal courts repeatedly have declared unconstitutional efforts to end partial-birth abortion, and (this legislation) does not remedy deficiencies identified by the courts.”

Mr. Long said in his statement that the conference “does not believe the governor needs to be reminded” that the U.S. Supreme Court in its April 2007 Gonzales v. Carhart decision and its companion case, Gonzales v. Planned Parenthood, upheld as constitutional the federal Partial Birth Abortion Ban Act, “thereby ensuring that measures which mirror the federal ban would be constitutional as well.”

“The game of playing politics with human life is beyond tiresome and must end for the sake of the most vulnerable among us – the unborn,” Mr. Long said.

Father Frank Pavone, national director of Priests for Life, also urged Granholm to sign the Michigan legislation, saying that there has been “a Mr. Long-standing dispute over (her) conflicting claims to be Catholic and also supportive of the ‘right to choose’ abortion.”

“If she vetoes this bill, that dispute will only intensify,” Father Pavone said in a statement. “But signing it is no imposition of Catholic doctrine. It’s just that the Catholic Church teaches that its members aren’t allowed to tolerate child-killing. It’s not so much about Catholic doctrine as it is about human decency.”