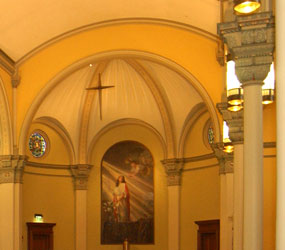 In death, Michael Murphy was remembered as a man who breathed new life into everything he touched.

The prominent Baltimore architect, who died Feb. 9 at age 62, was known for restoring several Catholic churches to their original grandeur. Murphy was an active parishioner of Ss. Philip and James in Charles Village and a co-founder of Murphy and Dittenhafer Architects.

“For him, architecture was not just a profession or a way to make money, it was an expression of his own personal faith” said Father William A. Au, the pastor of Ss. Philip and James who was to offer Murphy’s funeral Mass Feb. 17.

“He appreciated the value of having a good space for worship and a space that allowed people to experience the spirit,” Father Au said. “In all of his projects, he had a good sense of the kind of emotional, spiritual experience a structure could help people to have – whether it was a church or some other kind of structure.”

Murphy, an extraordinary minister of holy Communion, lector and former pastoral council member at his parish, completed an interior restoration of Ss. Philip and James.

In the late 1990s, Murphy worked on a major restoration of St. Ignatius in downtown Baltimore – extending the sanctuary into the body of the church, redesigning the narthex, reorienting the interior schemes using 17 different colors and installing new lighting. The restoration received numerous architectural awards.

In 2003, Murphy designed a complete renovation of St. Ignatius’ lower-level chapel, using indirect lighting to convey a sense of warmth and installing what the pastor describes as a “powerful” crucifix. Father Watters remembered that when he mentioned to Murphy that the chapel lacked an image of the Blessed Virgin Mary, the architect donated his own replica of a 14th-century Florentine Madonna that now stands in a back wall.

“Mike was a tremendous person to work with,” Father Watters said. “He was very easy, very engaging, very creative and a great listener. He had a great sense of the Second Vatican Council and the meaning of the documents that called for the proper use of the church and a space for worship.”

Murphy was known for other projects in Baltimore, including St. Vincent de Paul parish and various houses of worship. His firm renovated a building on Park Avenue to serve as the new home of The Catholic Review. Murphy also helped in the restoration of the Hippodrome in Baltimore.

One of his most prominent efforts was the restoration of the Marikle Chapel at College of Notre Dame of Maryland.

Dr. Mary Pat Seurkamp, president of the Baltimore college, praised the architect’s work on the project. The award-winning effort, which Murphy completed with James P. Suttner of his architecture firm, undid drastic changes from the 1960s to expose high ceilings, soaring arches and ornate capital pillars.

“Mike’s real gift was understanding older, historical structures and bringing his skill and his creativity and, quite frankly, a lot of instinct in recapturing the earlier beauty of those spaces,” Dr. Seurkamp said. “The chapel is a jewel and the heart of the campus. It’s a place where we have great celebrations, but it’s also a place that provides quiet time, reflection time and a respite for people.”