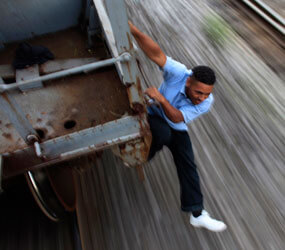 MEXICO CITY – Mexico’s National Immigration Institute is looking to boost the country’s image among its neighbors.

Twice in recent weeks, the institute issued statements after two mass detentions of undocumented migrants heading north – all Central or South Americans, save for a lone Nepalese national – that emphasized how the 229 detainees were safe and being properly treated.

It’s worth noting that the statements focused on safeguarding the lives and human rights of the detainees and that they are protected from “abuses and crimes committed by organized criminal networks” so they can be repatriated to their countries of origin in a “dignified, orderly and secure manner.”

The statements detail what should be standard procedure for the institute. More importantly, they reflect efforts to change the image of a country tarnished by allegations of showing crushing indifference to human rights abuses committed against undocumented migrants and a failure to protect people transiting the country from extortions and kidnappings carried out of drug cartels and organized crime.

Mexico’s reputation has been especially stained in Central America, where emigration is rife and details of the indignities suffered by citizens heading north – such as the August massacre of 72 undocumented migrants on a ranch near the Texas border – have made scandalous headlines and provoked deep anger. The massacre and the ongoing failure to protect migrants have threatened to sour relations between Mexico and many Central American countries.

“There’s a lot of upset … because it’s felt the Mexican government has not acted quickly to bring those persons involved to justice,” said Mauricio Diaz Burdett, coordinator of the Social Forum on Foreign Debt and Development in Tegucigalpa, Honduras.

“There’s upset in the sense that Mexico isn’t doing enough to protect those who are migrating,” he said.

Catholic groups working with migrants transiting Mexico say abuses have been common for decades even though the country has railed against the negative portrayal of Mexican citizens without documents in the United States.

Crooked police and immigration officials have long been known to demand bribes to allow passage through Mexico, leveraging the country’s rampant impunity and migrant’s fears of running afoul of immigration laws.

Father Alejandro Solalinde, founder of the Brother of the Road shelter for migrants in Ixtepec, in the southern state of Oaxaca, said that organized criminal groups began moving in on the extortion of crooked officials several years ago. Groups such as Los Zetas also started kidnapping migrants to demand ransoms from loved ones living in the United States, he said.

The National Human Rights Commission released a report in June 2009 showing that 9,758 undocumented migrants had been kidnapped in Mexico between September 2008 and February 2009. About two-thirds of the victims were from Honduras and 90 percent had been kidnapped by groups such as Los Zetas, which is comprised of former soldiers notorious for extortion and using high-profile terror tactics.

Los Zetas were implicated in the August massacre of 72 migrants, which a survivor told Mexican media resulted after the kidnapped victims were unable to pay ransoms and refused to join the ranks of organized crime.

Security experts say Los Zetas are known to recruit vulnerable migrants and have operations in Guatemala. Father Alan Camargo, spokesman for the Matamoros Diocese, which borders Brownsville, Texas, and includes the massacre site, said Los Zetas recruit from the 500 daily deportees being sent home via Matamoros.

Migrants know the risks while transiting Mexico. Father Gianantonio Baggio, director of the Nazareth Migrant House in Nuevo Laredo, also on the Texas border, said many migrants began pursuing other routes to the United States because of the risks of travelling through Los Zetas-controlled parts of Eastern Mexico.

Some, such as Father Solalinde, try to dissuade the migrants as they pass through migrant shelters. The priest said a few heed the warnings, but most leave but stayed longer than planned at his shelter to reconsider their options.

Few abandon plans to leave Central America, however, despite knowing of the risks awaiting them in Mexico and government campaigns to dissuade would-be migrants.

“Imagine the situation they live that they would prefer to run these tremendous risks, with so much danger, to improve their lives. The situation of misery and violence they live (in Central America) is so sad. They have no options,” he explained.

Mexico has taken public steps to improve the situation for migrants entering the country. National Immigration Institute commissioner Cecilia Romero resigned her position in September after widespread outcry over the August massacre.

In addition, the Interior Ministry launched an advertising campaign advising migrants of their rights and encouraging them to denounce crimes. Despite decriminalizing illegal migration in 2008, the Mexican government has promoted finding a regional solution to the migration problem while proposing comprehensive changes to current laws.

Other problems persist, however. Shelters for migrants have been threatened with violence. Father Solalinde said he has received death threats from Los Zetas “for retaining their merchandise” at the shelter he runs.

Father Solalinde welcomed recent changes at the top of the immigration institute, but he said less responsive state-level delegates “give the orders.”

He expressed skepticism that the changes would be meaningful, meant to only improve Mexico’s tarnished image.

“The most important thing for the federal government is its image.”