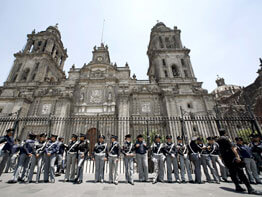 MEXICO CITY – Church officials reopened Mexico City’s Metropolitan Cathedral with the support of nearly 50 police officers after services were suspended when protesters interrupted a Mass and kicked over pews.

A statement issued by the Mexico City Archdiocese Nov. 26 said it trusted the city police department would protect the church and its worshippers with a contingent of officers stationed there permanently.

“We are resuming services as the civil authorities are guaranteeing the security of the faithful, the church officials and the building,” the statement said.

A heavy fence was erected around the cathedral; police were posted inside and outside the building and searched people entering the cathedral.

Hilda Benitez, 53, said she did not mind being searched by police as long as she was safe.

“Security is the most important thing,” she said.

Auxiliary Bishop Antonio Ortega Franco of Mexico City said the church did not want any more conflict with the protesters.

“We forgive them. The church should be a sign of forgiveness, and we should hope they, too, forgive us,” Bishop Ortega said.

Church officials had suspended all services Nov. 19 after about 150 protesters stormed into a Mass the previous day, shouting slogans and kicking over pews. It was the first time the cathedral had suspended services since Mexico’s Cristero uprisings in the 1920s.

Leftist leader Andres Manuel Lopez Obrador, who lost the 2006 presidential race by a razor-thin margin, was leading a protest in the plaza adjoining the cathedral. Lopez Obrador claims the election was rigged and calls himself Mexico’s “legitimate president.”

The ringing of the church bells during one of the rally’s speeches angered the demonstrators.

A breakaway group stormed past a line of police and charged up the cathedral aisle. They finally left after the bells stopped ringing and other protesters called for moderation.

Father Ruben Avila Blancas, who was in the church, described it as an act of terrorism.

“The protesters came in threatening and assaulting. Many of the faithful were injured: old people, crying children,” Father Avila said. “We cannot go on like this.”

Guadalupe Acosta, head of Lopez Obrador’s Democratic Revolution Party, condemned the incident but called for an investigation into why the church bells were sounding for such a long time.

“We deny responsibility for these acts,” Acosta said on Mexico’s W Radio.

Lopez Obrador, who says he wants to lift millions of Mexicans out of poverty, has always described his movement as nonviolent and says he supports demonstrations and civil resistance.

In 1926, the Catholic Church suspended Masses across Mexico after assailants carried out bombings and killings in churches and President Plutarco Elias Calles introduced tough anti-clerical laws.

Some 90,000 people were killed in the ensuing Cristero war before the government and church reached an accord in 1929.