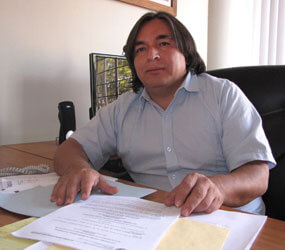 MEXICO CITY – Jacinta Francisco Marcial sold ice cream in the state of Queretaro until she was accused in 2006 of kidnapping six federal agents who were searching for illegal merchandise.

Centro Pro has won fame for defending the poor and oppressed, wading into difficult land disputes and confronting impunity – all in a country with a less-than-transparent legal system and frequent abuses of power.

The center’s work has won awards. The Mexico City legislative assembly, for one, cited the Centro Pro for its work on behalf of Marcial.

But with the fame and awards have come controversy. The Archdiocese of Mexico City and foreign critics have charged that Centro Pro improperly associated itself with groups working to decriminalize abortion and implement same-sex marriage laws.

The accusations, made in a letter signed by Cardinal Norberto Rivera Carrera of Mexico City, prompted the Canadian Catholic Organization for Development and Peace, the charitable arm of the Canadian Conference of Catholic Bishops, to drop funding for Centro Pro earlier this year.

The controversy once again highlights the conundrum of how Catholics should support foreign groups, including those that might occasionally work on broader human rights issues with groups openly in favor of public policies that go against church teachings.

It also points to the tensions in Mexico between the country’s most senior prelates and human rights groups.

Jesuit Father Jose Rosario Marroquin, Centro Pro’s director, recognizes the controversies courted by one of the Mexico’s oldest and best known human rights groups and acknowledges the discomfort it has caused for some Catholic leaders who have preferred not to antagonize the federal government since relations between Mexico and the Vatican were restored in 1992.

It also counts on support from many Catholics within Mexico.

“The position of the archdiocese is different from the bishops’ conference,” he said.

Centro Pro was honored last year, along with Catholics for the Right to Decide, an organization the Mexico City Archdiocese said is non-Catholic. A photo of the group’s representatives – including the then-Centro Pro director, Jesuit Father Luis Arriaga – was taken as part of the ceremony. The website LifeSiteNews.com cited the photo earlier this year as an improper association made by Centro Pro.

The photo and accusations were not Centro Pro’s first brushes with controversy. Centro Pro participated with more than 100 non-governmental groups in crafting a 10-page report for Mexico’s 2009 human rights evaluation by the United Nations, Father Marroquin said.

Critics said some of the authors had promoted a Mexico City law decriminalizing abortion during the first 12 weeks of pregnancy.

Father Marroquin said the human rights report required a cooperative effort between groups with disparate viewpoints, and the final document made no mention of abortion.

“It was worth the effort to coordinate ourselves and present just one report with our points of view on human rights,” Father Marroquin said.

“We worked on what we had seen and what we knew: the military, public security, the justice system and some things about the development of mega projects.”

Development and Peace investigated the matter in 2009 and found no wrongdoing. The posture was reversed earlier this year after the publication of Cardinal Rivera’s letter.

Father Hugo Valdemar Romero, spokesman for the Mexico City Archdiocese, said Catholic groups cannot “play a double game” by working with others whose work violates church teachings. Accepting an award alongside such groups also was unacceptable, he said.

“I know that the cardinal has received many letters from Catholics scandalized by this matter,” he said.

The withdrawal of support from Development and Peace will not affect Centro Pro’s ability to handle complex and controversial cases, Father Marroquin said, although it will require taking some austerity measures.

Controversy, Father Marroquin said, has been frequent for Centro Pro since its founding by Jesuits in the late 1980s, especially for its defense of suspects accused of offenses pertaining to the Zapatista uprising of the mid 1990s. It was a position unpopular with many bishops.

A more recent case focused on farmers in Guerrero state, who fought back against logging companies illegally harvesting trees on their land.

The farmers, Teodoro Cabrera and Rodolfo Montiel, were detained by the military in a 1999 raid, tortured, charged with weapons offenses and imprisoned. The men were released on humanitarian grounds in 2001, but, with help of Centro Pro lawyers, the case went to the Inter-American Court of Human Rights and the farmers won.

“Without the help of (Centro Pro), he would still be in prison for something he didn’t do,” Cabrera’s wife, Ubalda Cortes, said at a June 21 event held by the Interior Ministry to mark Mexico’s acceptance of the decision.

“They were with us … from the beginning.”