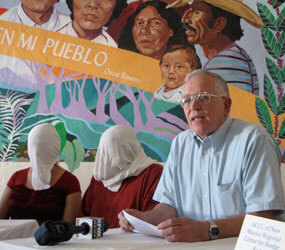 EL PASO, Texas – An unidentified Mexican man and his wife, fearful to reveal their true identities, spoke recently to a group of reporters and immigration advocates in this border city about the violence that forced them to seek refuge in the United States.

The husband tearfully described how carloads of thugs arrived at their home in neighboring Ciudad Juarez, Mexico, burst onto their property, murdered four family members and shot at another two children in the neighborhood.

The family subsequently fled across the border to El Paso.

“All I want is security for my family,” the man said.

The family’s long-term safety is anything but assured, however, because of the complexities of the U.S. immigration system and, advocates say, an unfavorable bias toward asylum seekers from Mexico, whose requests are granted at a rate of only 2 percent.

“There is no legal recourse for us to stay here,” said the man, whose family has not requested asylum. “Legally speaking, I’m practically in hiding.”

Such stories have become common in El Paso, where the local police department estimates 30,000 Ciudad Juarez residents have abandoned the city of 1.3 million inhabitants and have settled directly across the Rio Grande.

In Ciudad Juarez, stories of extortion and kidnapping are common, and a turf war between narcotics-trafficking cartels and gangs affiliated with the cartels has claimed an estimated 750 lives this year. Many of the city’s residents simply cross the border by brandishing identification cards that range from U.S. passports to 10-year visas to temporary crossing permits.

Advocates in El Paso said U.S. border and immigration officials are not interested in the stories of violence, threats and extortion told by asylum seekers.

“We are now aware that Mexican nationals, fleeing the violence in Mexico, crossing into the United States and seeking and needing protection are finding that the door has been closed,” said Ruben Garcia, director of Annunciation House, a Catholic organization in El Paso that has supported asylum seekers for 32 years.

“To petition for political asylum implies being detained, denied and running the risk of being sent back to the same violence from which they fled,” he said.

The arrival of asylum seekers is nothing new in El Paso, which Garcia says has long been a gateway to the United States for those fleeing violence further to the south in places such as Central America and Colombia.

The nature of those asylum seekers changed in early 2008, when violence erupted in Ciudad Juarez and the Mexican military and federal police were sent to the border region – part of a crackdown on the cartels that has claimed nearly 23,000 lives since President Felipe Calderon took office in December 2006.

Since then, asylum advocates in El Paso say they’ve been swamped with requests from Mexican nationals.

“I have received 432 calls requesting consultations for asylum since January. Every day I get four or five calls,” said Sergio Saenz, a paralegal and intake specialist with Las Americas Immigrant Advocacy Center in El Paso.

“People come to my office saying their sister or brother has been killed, mothers crying, grandmothers crying, children crying because they lost a dad,” he said.

Numbers from the Justice Department’s Executive Office for Immigration Review that were provided by Annunciation House say that 12,100 asylum requests from Mexico have been submitted since the cartel crackdown began in 2006. Only 232 of those requests have been granted. In comparison, Colombian nationals submitted nearly 5,900 claims over that same period – 40 percent of which were granted.

Spector associated the hostile treatment and low approval rate of asylum claims to U.S. support for the cartel crackdown in Mexico, which has been supported with technical support, law enforcement consulting and military equipment provisions through an initiative known as Plan Merida.

“To admit that there’s persecution and that the government of Mexico is unable or unwilling to protect its own citizens is to admit that the war on drugs and the millions of (U.S.) taxpayers’ dollars that we’re funneling to Mexico are going into a hole and we’re losing that war and we’re having no impact,” he said.

“It’s a recognition once the courts start granting asylum to Mexicans that in fact there is corruption … there is violence and there is no end to it.”

Messages left with the Dallas office of the U.S. Bureau of Citizenship and Immigration Services were not returned.

The couple fleeing Ciudad Juarez, who spoke with heads covered during a recent news conference in El Paso, said there would be no protection from the violence if they returned home.

“We don’t want to return to Juarez. We were traumatized. My family suffered terribly: 20 years of work and savings were lost in 10 seconds,” the man said. “I want to tell the U.S. government that there are Mexicans who need their help.”