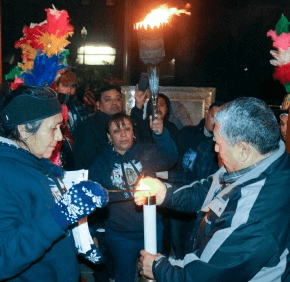 WESTMINSTER – Organizing cars and pedestrians in the parking lot of the Westminster Fire Department as they prepared to process through the seat of Carroll County en route to Mass in honor of Our Lady of Guadalupe was probably not what Howard Kapp envisioned when he signed on as usher at St. John.

Yet there he was Dec. 12 as the Westminster parish’s Hispanic community donned native costumes, adjusted strings of flowers on their cars and secured a statue of the patroness of the Americas in a place of honor in the back of a pickup truck.

“They’ve got a lot of life in this community,” Kapp commented as the processors tinkered with a gas generator that would power a Latin soundtrack to their show of love for the Blessed Virgin Mary.

Cesar Contras, 5, and Arturo Contras, 6, of Westminster, wear traditional Mexican clothing during the Our Lady of Guadalupe feast day celebration at St. John, in Westminster Dec. 12. (Bill Ryan/Special to the Review)

“They’ve got me taking Spanish classes now, trying to learn,” he added.

Monsignor James P. Farmer, pastor of St. John, described the dynamic with a go-to phrase: “We have one faith community with two languages.”

“Our Hispanic members have brought great vitality and enthusiasm to our parish,” Monsignor Farmer told the Catholic Review before the weekend’s festivities in honor of Our Lady of Guadalupe.

“Their enthusiasm inspires all of us, and we are trying hard to combine the talents of our English and Spanish speakers,” he added.

Like other parishes with active Hispanic communities – St. Gabriel in Woodlawn, Holy Trinity in Glen Burnie, Sacred Heart of Jesus- Sagrado Corazón de Jesús in Highlandtown and Sacred Heart in Glyndon, to name just a few – St. John pulled out all the stops for the feast of Our Lady of Guadalupe.

Aztec dancers from St. Joseph Church in Cockeysville enter St. John Church in Westminster, for the Our Lady of Guadalupe feast day celebration Dec. 12. (Bill Ryan/Special to the Review)

“Because we have a large community from Mexico, this feast is one of the most important in our church,” said Lina Ocasio, the parish’s religious education administrator, in an email prior to the celebration.

In addition to carrying the Mexican flag, parishioners processed into the church bearing flags from the U.S. and eleven other Latin American countries, from Ecuador to Uruguay. According to Kapp’s count, 390 turned out for Mass celebrating the Feast of Our Lady of Guadalupe.

“There are more Hispanics here than we think,” he noted.

Watch a video below:

A substantial number of Anglo faces peppered the pews as well, validating Monsignor Farmer’s assessment of “one community.”

According to Ocasio, the integration process started in earnest about 10 years ago, under then-pastor Monsignor Arthur F. Valenzano, who died Sept. 5 of leukemia, and then-associate pastor Father Hector Mateus-Ariza.

“Today we have an excellent Spanish-speaking priest, Father Gonzalo Cadavid-Rivera, as well as the support of our pastor and all the staff members,” Ocasio said.

Father Cadavid-Rivera was a civil lawyer in his native Colombia before he was ordained to the priesthood in the Archdiocese of Baltimore in 2009.

“After a couple years working for the (Colombian) government, I made the decision to say yes to the Lord,” Father Cadavid-Rivera explained, “but I never imagined I’d be in America, serving Spanish-speaking Americans.”

In his homily, which he delivered in Spanish, the priest noted that the apparition of Our Lady of Guadalupe converted the indigenous people of Mexico through inculturation.

“(The natives) had missionaries, and they were working for them, but they were still worshipping the sun, the moon – just nature,” Father Cadavid-Rivera said.

He also noted that she instilled the values of love, truth and respect for life – all of which apply as much today as in 1531, the year the Blessed Virgin appeared to St. Juan Diego Cuauhtlatoatzin.

“Our Lady of Guadalupe was pregnant, and that is a very important message,” Father Cadavid-Rivera said.

Following the Mass, the celebration continued with dinner and a show – a dramatization of the appearance of Our Lady of Guadalupe and a couple cultural dance performances, all by visiting parishioners of St. Joseph in Cockeysville.

Click here to view or purchase more photos from the event.

The challenge of Our Lady of Guadalupe