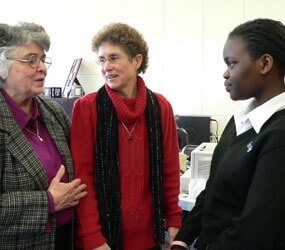 Religious Sister of Mercy Marilyn Lacey warned the student body of Mercy High School Dec. 11 that they may want to turn away from a slide she was about to show.

As the founder and executive director of Mercy Beyond Borders displayed a photo of some Sudanese walking down a dirt road, they were just skin and bones. The students from the all-girls school gasped.

“I think it’s one thing to hear about things going on, but it’s another thing to see,” junior Marybeth Bindel said. “It’s really good when it comes from somebody who’s actually been there and is helping.”

Sister Marilyn came to the Baltimore City school as part of the school’s annual Foundation Day. Sister Catherine McAuley began the order Dec. 12, 1831, and today, some 4,000 Mercy Sisters serve the poor in North, Central and South America, the Caribbean, Guam and the Philippines.

Mercy Sister Carol Wheeler, president of Mercy, said the school has been celebrating Foundation Day since 1978. The Baltimore institution is one of 40 secondary schools in the Mercy United States network.

“There’s just a systematic attempt to socialize them into an understanding of Catherine McAuley and the charism,” Sister Carol said.

Sister Marilyn said her group seeks to educate women in the Sudan and develop entrepreneurial opportunities for them. Women there lack human rights, she said, and have to find water and firewood each day, a trek that can result in rape.

“Each day is a struggle to survive, and the women are the ones who do all the hard work,” she said of those in Sudan.

Sudan has one of the highest child birth death mortality rates in the world, Sister Marilyn said, and there are no banks.

“Our girls will give, they just need to know,” D’Agostino said. “We need to keep giving them the knowledge and then help the figure out the action they need to take.”

“We realized we needed to step up because we’re part of the Mercy community now,” Katie, a sophomore, said. “It’s amazing how we can all come together.”

Tanesha, a junior, said students are aware of Mercy’s mission from their first day at the school.

“The first story you hear is about Catherine McAuley, and they try to push you from there,” Britney, a junior, added. “They give you tools for what you can do now.”