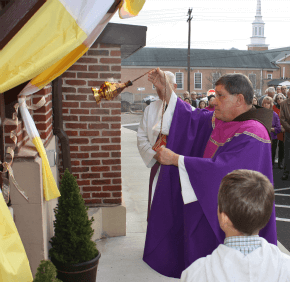 By Mary K. Tilghman
Special to the Review
Dr. Kathryn Boling felt good as she drove to Mercy Medical Center’s Lutherville Personal Physicians. It was raining lightly at 6:20 a.m., June 24, her granddaughter Carlee’s birthday.
A tractor-trailer pulled next to her on the Baltimore Beltway. Moments later, the family physician found herself trapped in her car, slammed between the truck and the concrete median wall. Seeing fire, she panicked.
As soon as she kicked open the door, another motorist grabbed her arm and pulled her to safety moments before her car became engulfed in flames.
Boling, 58, believes that man, David Ndegwa, and his wife, Anne, saved her life on a morning seared in the memory of the Reisterstown woman.
She doesn’t like driving near trucks, and remembers worrying about one as the Beltway curved near the Charles Street exit.
“The cab came right into my lane,” said Boling, who changed lanes as the truck continued to encroach. “It was huge and very scary.”
The truck plowed into her Honda Accord. Secured by her seatbelt, she felt her arms and legs flying around, and had one final thought: “I’m going to be crushed.”
Her car stopped with its driver side wheels atop the jersey barrier. Boling’s relief at being alive lasted only until she saw fire on the passenger side.
“I have to focus or I’m going to die,” she thought.
Forcing herself to calm down, she struggled to escape, then felt the hand of Ndegwa, whose wife Anne swooped Boling up and hugged her.
“The car was already on fire,” said Ndegwa, 40, a Woodlawn resident. “I saw her trying to get out. At that point, I just didn’t think. … Thank God I was able to help her get out before the car burst into flames.”

The Ndegwas were equally rattled. On their way to work, they were trailing Boling when the truck’s trailer shoved their Nissan Altima into the median wall and dragged it.
“In the back of my mind I was thinking, ‘This is it,’?” Ndegwa said.
After helping his shaken wife, the couple escaped through the only possible opening, a broken back window, then Ndegwa rushed to help Boling.
“What he did was really brave,” Boling said. “He didn’t know if that car was going to explode or not.”
Boling needed surgery to repair three fractures to her right foot. She also suffered a fractured ulna in her right arm, a dislocated wrist, and injuries to her rotator cuff and cervical disc. David Ndegwa suffered cuts and a back injury, which still causes him pain.
After being treated at Sinai, the couple visited Boling and returned to the accident scene.
“I couldn’t believe me and my wife were in that car,” Ndegwa said. “I thank God that we were all able to come out.”
A Baptist, he attended Catholic middle and high school in his native Kenya, and also attends Kenyan Mass at St. Matthew’s Church in Northwood.
Boling, who returned to work part-time a month after the crash, said the accident taught her three important lessons, which she shares with patients.
“Why did I survive?” she asked. Seatbelts. She researched other accidents from the same week as hers and discovered those not wearing them had been thrown from their cars and died.
She believes that when she turned her wheels toward the jersey barrier which forced the car to ride up on the wall, it saved her life. Remaining calm was also vital.
“It’s normal to panic. You have to say, ‘If I want to stay alive, I have to calm down,’?” said the physician, who  believes it’s a miracle she lived.
“I didn’t burn to death,” Boling said. “I’m alive and that’s a miraculous thing.”