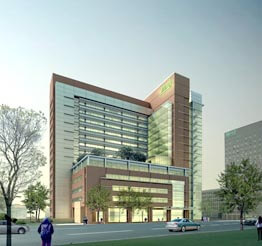 In January, Mercy Medical Center, Baltimore, is expected to begin construction and site excavation for a new $400 million patient tower with an anticipated completion date of fall of 2010.

According to Thomas Mullen, president and CEO of Mercy Medical Center, the current tower, which was designed in the 1950s, is beginning to “age out,” and is unable to adapt to the demands of modern technology. A lack of rooms is also an issue, he said.

The new 18-floor tower will feature rooftop gardens to create “green space,” a two-story lobby with spiritual and customer-service amenities, hotel-like features with 100 percent private rooms to enhance safety and privacy, “operating rooms of the future” and convenient parking. The new tower will include 229 licensed beds, a floor for an additional 32 beds and 15 operating suites.

“The garden will lower the energy bill,” said Mr. Mullen with a laugh. “We have reinvented Mercy Medical Center for the future.”

The building project was not without its challenges.

Mercy faced criticism from preservationists when it demolished historic town homes to make way for the new facility, and most recently there is the factor of cost escalation. Mr. Mullen said Mercy was constructed on a hill and therefore the new patient tower will need to be built into the hill as well, causing the first three floors to be underground.
Construction of the new tower will create an additional 995 jobs and $73 million in increased salaries and benefits, said Mr. Mullen.

Currently Mercy Medical Center supplies 4,286 jobs and $148.6 million in salaries and benefits. The new tower will allow for relocation of all inpatient services except sub-acute and detox units, operating suites, radiology and the emergency department. The current tower will remain intact for physician and administrative space. The rooftop garden will be located across from the intensive care unit, which will allow visitors the opportunity to have some time away without leaving the grounds, said Mr. Mullen.
“If you believe in downtown Baltimore you want to support Mercy,” said Mr. Mullen. “The tower is important to Mercy and Mercy is important to the city.”

Mercy plans to open a new $24 million Pleasant Street garage, with 1,375 spaces, in August. The garage will allow for the demolition of the older main patient garage and make way for the replacement tower.

Mr. Mullen said years ago when many of the hospitals were moving out of the city Mercy stayed. He believes the new tower will guarantee the hospital’s stay and commitment to Baltimore City.

“The hospital is an economic generator,” said Mr. Mullen. “We are continuing to grow and advance.”