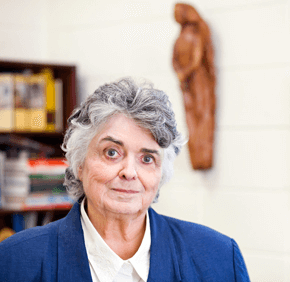 After being the face of Mercy High School since the late 1970s, Religious Sister of Mercy Carol E. Wheeler will conclude her tenure at the all-girls’ school in Baltimore at the end of the 2012-13 school year.

“Thirty-six years is a good stretch of time,” Sister Carol said. “We have concluded the first 50 years of the school.”

Sister Carol, 76, joined the Mercy faculty in 1961, one year after it opened. She taught English, Latin and religion.

Sister Carol taught at Mercy until 1968 before returning to her native Alabama for one year to teach English. She returned in 1971 as assistant principal before leaving again in 1972. She came back in 1976 as an English teacher, adviser to new teachers and assistant in public relations.

Religious Sister of Mercy Helen Amos, executive chairwoman of the board of trustees for Mercy Health Services, who has known Sister Carol since they were in elementary school together in Alabama, said “when someone gives so many years to one ministry, what you could be concerned about is whether they would continue to be fresh in their approach.”

“She was continually shaping the vision with a look to the future,” said Sister Helen, who described Sister Carol as “a person of superior intelligence and someone who is deeply thoughtful, has very high standards and works hard.”

“She has always challenged the faculty to understand, be aware of the needs of society and how that would translate to the skills our students would need to better serve society,” D’Agostino said. “She is constantly giving us (faculty) articles to read and pushing us to make sure we understand and are in the forefront of educational trends and issues.”

There is an emphasis on global education at Mercy, which opened a Center for Global Education in 2011.

“Education is bigger than classrooms,” Sister Carol said. “You teach what is going on in the world. Mercy High School has, from the beginning, been aware of the larger society … and has taught with that in mind.”

Sister Carol, who calls teaching “a privilege,” still teaches one class – Introduction to Philosophical Thinking – and has seven advisees.

“You find out a lot about your students when you have advisees and teach a class,” she said. “Teenagers are fun and they keep you young. I could enjoy talking to students all day.”

She likes the school’s diversity.

“They (students) are comfortable being themselves,” Sister Carol said. “Be who you are and we will help you become who you can become. That makes me proud.”

On her watch an auditorium was built, which Sister Carol called “the first major physical addition to the school.”

She commissioned a bronze sculpture of her order’s foundress, Catherine McAuley and the student, which is on display at the school.

“I am particularly proud of it,” she said.

She doesn’t have specific plans for life after Mercy, but said “something will arise.”

A new president is expected to be selected by the 2013-14 school year.