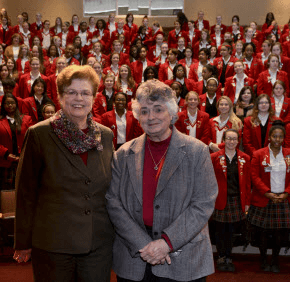 By Catholic Review Staff
Pegeen D’Agostino, principal of Mercy High School, has been named the Baltimore school’s interim president for the 2013-14 school year, Mercy’s Board of Trustees has announced.
She will begin her new position July 1.
D’Agostino has been Mercy’s principal since 2009 and has served for 28 years as a teacher, administrator and board member in other schools sponsored by the Sisters of Mercy.
“Working with the wonderful girls and young women at Mercy High School is the most gratifying and rewarding part of my job,” D’Agostino said in a statement. “To watch Mercy High Schools girls be transformed from active middle schoolers into mature, well educated, self-confident, productive, contributing members of our community is the best job anyone could want.”
D’Agostino will take the helm from Religious Sister of Mercy Carol E. Wheeler, who has been the face of Mercy High since 1977. Sister Carol joined the Mercy faculty in 1961, one year after it opened, the Catholic Review previously reported.
“Mercy High School, along with the great legacy of accomplished women who have walked these hallways, has been at the heart of what I do for nearly four decades,” Sister Carol said in a statement. “We provide our students with an excellent education and encourage them to develop as women of faith, with a strong sense of social justice. To that end, my colleagues and I have ensured that they understand their power—as individuals and in working with others—to make the world a better place now and wherever they will be. This is an awesome responsibility. It is a privilege and a pleasure.”
She continued, “Peg D’Agostino is committed to the Sisters of Mercy and to the tradition of Catherine McAuley, their Irish founder, especially in the education of young women. Her care and concern for our Mercy girls is legendary. Peg has been an exceptional colleague in my long experience with her and working with her is a personal pleasure. To entrust the future of Mercy High School to Peg for the 2013-14 school year gives me confidence and assurance that Mercy will remain strong in its passion for the future and compassion for the world.”
Also see:
Mercy High’s worldview begins in leader’s office
School news from across the archdiocese
Feb. 21, 2013, Catholicreview.org
PrevNext