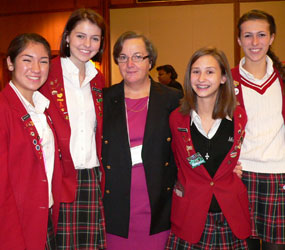 The theme of the 29th conference of the Mercy Secondary Education Association was “Fostering Global Vision & Responsibility.”

That made it a must get for Baltimore and Mercy High School, according to Religious Sister of Mercy Carol E. Wheeler, president of the institution.

“I actually asked for us to host this particular conference,” Sister Carol said. “The theme has been a focus of Mercy High School for some time.”

Religious Sisters of Mercy work in 49 countries, and Argentina and Guam were among the nations represented at the Oct. 14-16 conference at the Hyatt Regency in the Inner Harbor

Dinner and student performances were held at Mercy High Oct. 15. The school closed that day, so that student leaders and staff could hear from Sisters of Mercy with strong international credentials, such as Sister Adele Howard, an Australian, and Sister Marilyn Lacey, from California.

The opening presentation was given by Sister Deirdre Mullan, a native of Northern Ireland, who began representing the religious order at the United Nations in 2001.

“We live in an interdependent community,” Sister Deirdre said. “It’s no longer the United States, or Australia or Ireland. We’re bound together, culturally and economically. The globe is shrinking. If we all just check the labels on our clothes, you can see that.”

“They are being seduced to come into the U.S. and other countries, with empty promises,” she said. “The key is scholarships for girls. When a girl can read and write. … “

Mercy High, which is celebrating its 50th anniversary, has a Task Force on Global Education.

The conference concluded with a Mass at the Basilica of the National Shrine of the Assumption of the Blessed Virgin Mary in Baltimore, and commissioning of new board members.