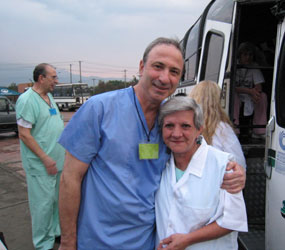 How powerful is the passion of Dr. Armando Sardi, the director of the Institute of Cancer Care at Mercy Medical Center?

His patients become his helpers.

Sardi, the head of the Division of Surgical Oncology at Mercy, operated on Maria Stanton in 2007. Last March, she was fit enough to join his fifth annual mission of mercy to his native Colombia, putting her Spanish to work as a translator.

Stanton served as a go-between for a band of nearly 90 Americans who provided services at four medical institutions in and around Sardi’s hometown of Cali. What is taken for granted in Baltimore, is ground-breaking in Colombia.

“An ob-gyn (obstetrician-gynecologist) from Massachusetts performed the first Caesarean delivery in a hospital there (Colombia) earlier this year,” Sardi said. “Every specialty that travels with us takes it upon themselves to make things like that happen.

“We do oncology, pediatrics, ophthalmology. A person with a cataract is essentially blind. Five minutes later, they see. Because there wasn’t enough money to fix their broken leg, kids limp around. After a half-hour operation, they walk normally. A gastroenterologist can do 50 procedures in one day.”

It adds up to nearly 25,000 patients receiving care on his missions.

Other non-medical professionals follow Sardi to Colombia, as one veteran doctor of the missions has recruited a sibling, a math teacher, to make good use of the time spent in the waiting line.

“You have children running around with nothing to do,” said Lisa Garrett, who coordinates the missions. “Why don’t we teach them to read?

“We (Americans) wait for 15 minutes in a line, and we’re frustrated. People in Colombia wait for five hours to be seen, and they’re so grateful. That teaches us something, about patience.”

Colombia is in northwest South America, just south of Panama. According to Sardi, the nation has overcome much of the corruption and drug violence that afflicted it a generation ago. The United Nations, however, reports that half the population continues to live below the poverty line.

Sardi’s first mission occurred in 2006, right after he moved from St. Agnes Hospital to Mercy. His specialty is the treatment of intra-abdominal malignancies, incorporating heated chemotherapy.

“We do a very complicated surgery, for people with advanced cancer of the abdomen, colon, appendix,” Sardi said, mentioning surgeries as long as 15 hours. “This is pretty much people who are told to go home and die. Now we have survivors of 16 years.”

Over six days next week, Sardi will seek donations for his work. He’ll be at the Inner Harbor Sept. 19, for Heat It to Beat It, a walk to raise awareness of peritoneal carcinamatosis, a rare cancer in the abdominal cavity. On Sept. 24, he will be at Chestnut Ridge Golf Course in Lutherville, for a Mission to Colombia fundraiser.

Both events are through the auspices of the Mercy Health Foundation.

“The joy we feel, we get out of this more than we give,” Sardi said of his missions to Colombia. “What we do in six days is nice, but it doesn’t solve the problems there. How do we create care that’s sustaining? That’s the challenge.”