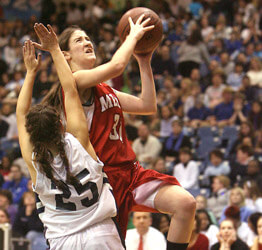 Magic-mania erupted as the buzzer sounded on Jan. 25 at the Towson Center, as the Mercy High School Magic outscored the Institute of Notre Dame 44-28 to take a 26-16 lead in this 42-year-old tradition called “The Game.”

“The Game” tipped off in front of 3,500 fans from Baltimore schools Mercy, in red, and IND, in blue, as Mercy controlled the tempo, the boards and the scoring to rattle the young Indians into an ice-cold shooting frenzy.

With numerous IND turnovers and a low shooting percentage from the field, the Magic team was free to run its offense, hit from the outside, double-down low, and substitute freely to take a growing 27-8 halftime lead into the locker room just as Mercy’s senior point guard Khadija Mitchell sunk a lofty three-pointer to beat the buzzer.

The crowd was generally sullen for most of the game, an uncharacteristically low energy from a crowd that usually yells and screams nonstop for their teams. Although cheers and dances from the pep squads and dance teams brought the energy up, “The Game” was low-key this year.

The Magic (15-3, 10-2) were successful in keeping the Indians 6-foot-2 center, Caitlin Bopp, away from the basket both on the offensive and defensive end. Yet Bopp’s teammates were unable to generate an alternate offensive plan until deep into the second half of play, and that’s when the noise level elevated.

Cheers from both sides of the arena inspired the players, especially IND (2-13, 2-10) players, who were able to cut a 22-point Mercy lead to 13 with three minutes remaining in the game, thanks to the scoring efforts of Jordan Bateman from the free-throw line, and Bopp and Amanda Kolb from the field.

Though it wasn’t enough to bring the game close, IND Head Coach Tully Sullivan was pleased with his players’ performance. “The team never folded. At halftime I told them, one stop, one score and don’t let them out-hustle us.”

Mercy showed poise and character throughout, with the majority of the Mercy roster seeing playing time. Eight players made it into the scorebook, led by junior Maggie Marion with 11 points, including two game-opening three-pointers. Point guard Khadija Mitchell tossed in six points and controlled the game from the top of the key. Senior Jessica Zikorus (three points) was solid in the paint, on the boards and provided solid senior leadership on the court.