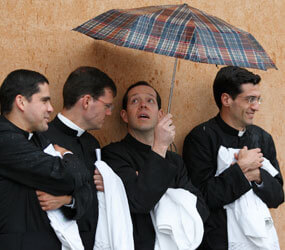 VATICAN CITY – Catholics expect a lot from their priests and Pope Benedict XVI is no exception.

Some people might have thought the pope convoked the June 2009-2010 Year for Priests as a praise-fest for the church’s collared class, but instead he highlighted the importance of priests in the life of the church by exhorting them to live up to their calling.

In hundreds of speeches throughout the year and in a special three-part series during his weekly general audiences in April and May, Pope Benedict described the identity and mission of priests, asked Catholics to pray for their ministers and asked the men in black not just to be good priests, but to be holy.

The fact that the church’s handling of cases of priestly sex abuse came to the fore in Ireland and other European countries and then was back in the news in North America made it impossible during the Year for Priests for the pope or anyone else to ignore that a problem existed, even if it involved just a small portion of the world’s priests.

But, a South African priest said, “it was good that the abuse scandal came out this year. It is an opportunity to recognize our sinfulness and the importance of our behavior.”

The priest, Father Stanley Masilompana from the Archdiocese of Johannesburg, is studying in Rome and said that during the Year for Priests, he has come to the Vatican each Friday to pray the rosary.

Each day, among the thousands of visitors to St. Peter’s Square, there are dozens of priests such as Father Masilompana. Some come on their own to pray, while others are leading pilgrim groups.

Father Masilompana said he thought some of the media coverage of the sex abuse scandal was unfair, but “I still believe that if Christianity is not persecuted, it loses its meaning; we get too self-sufficient and think that God is not in charge.”

God being in charge was one of the key points Pope Benedict made in his three audience talks on the ministry of priests.

Using the classical formulation of the “tria munera,” or three offices and tasks of a priest – to teach, sanctify and govern – the pope focused on how priests must allow Christ to act through them at all times.

The teaching role, he said April 14, is to make present, amid “the confusion and bewilderment of our times, the light of God’s word, the light that is Christ himself.”

“The priest does not teach his own ideas, a philosophy that he himself has invented, that he has discovered or liked,” he said, but “he proposes the truth that is Christ himself.”

The sanctifying role, he said May 5, involves putting people in touch with God, who is “light, truth, pure love” and doing so especially by offering the sacraments.

“Each priest knows well that he is an instrument necessary to God’s saving action, but also that he is always only an instrument. This awareness must make priests humble and generous in the administration of the sacraments,” the pope said.

The governing role, he said May 26, gets a bad rap in the modern world because people have seen too many examples of the abuse of power in governments and in relationships.

In the church, authority is a service of leadership “exercised not in one’s own name, but in the name of Jesus Christ,” who acts through priests to “guide, protect and correct his flock because he loves it deeply,” the pope said.

Father Vernon Clark, pastor of St. Anthony of Padua Parish in Cody, Wyo., didn’t really have a lot to say about governing when he was interviewed with a pilgrimage group in St. Peter’s Square June 2.

Teaching through classes and homilies and sanctifying through the celebration of the sacraments – especially the Eucharist and reconciliation – are the two most common elements of his ministry, he said.

“As for governance, if you are doing the other things well, then you already are leading the people,” he said.

“It pierces my heart. It is a call to deepen our humility … and to give myself more and more to Jesus through my practice of chastity and celibacy,” he said.

For Father Christopher Mathaha, a student from Klerksdorp, South Africa, the Year for Priests was important.

“For once we find someone – the Holy Father – who says, ‘I care about priests,’“ he said.