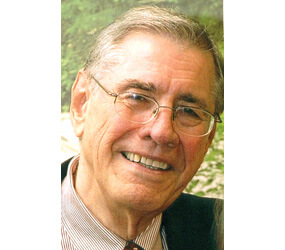 Paul Melanson was stopped at a red light when he heard a woman tapping at his car window.

Pregnant, she needed a pen to write down the Project Gabriel crisis hotline number she saw advertised on the bumper of his car.

After giving her a pen, Mr. Melanson jotted down his personal phone number. He told her to call if she needed help.

Melanson found out – much to his delight – that the woman chose to keep her child after reaching the agency’s hotline.

“He was passionate about the pro-life cause and wanted to help women and babies,” said Barbara Melanson, his wife of 30 years. “He literally would help anyone.”

When her 82-year-old husband died May 22, he was remembered as a leading champion of the pro-life movement in the Archdiocese of Baltimore.

As chair of the archdiocesan respect life committee for more than 13 years, he expanded the scope of its offerings and helped organize conferences on pro-life causes. He raised awareness on issues including abortion, chastity and embryonic stem cell research, and encouraged Catholics to support pregnant women.

Linda Brenegan, archdiocesan respect life coordinator, credited Melanson with energizing the respect life committee. When Cardinal William H. Keeler appointed him to head the group in 1991, she said, the organization had a small membership.

“He made it much more visible and active,” Brenegan remembered. “Paul was a great cheerleader and he recognized good, motivating speakers who were brought in to give presentations.”

Melanson, a longtime parishioner of the Cathedral of Mary Our Queen in Homeland and St. Ursula in Parkville, designed and arranged for the striking of an archdiocesan culture of life medal. The annual award, first given in 2000, recognizes individuals for their outstanding pro-life contributions.

Barbara Melanson said her husband wore a pin on his jacket that showed feet that were the same size as a six-week old’s in the womb.

“He hoped that someone would ask about them so he could tell them the baby was human and the feet could be seen on a sonogram,” she said. “They only had to grow big enough to be born.”

The Melansons had always been pro-life, but Paul didn’t become an activist until a friend showed the couple photographs of an aborted baby.

“It was an epiphany for both of us,” his wife said. “Paul was just stunned and wanted to do something.”

Barbara Melanson described her husband as a man of conviction whose faith motivated everything he did.

He returned Loyola College in Maryland’s Andrew White Medal in 1991, a year after receiving it. The move was in protest of an on-campus appearance of Sen. Barbara Mikulski, an abortion rights proponent.

While he was the chief financial officer and vice president of administration and finance for Loyola College in Maryland, Melanson arranged for the college to serve as a venue for a nationwide conference on the right to life in 1990.

“He had such a depth of understanding that all life matters,” Barbara Melanson said. “He believed you have to love the mother and the baby. It’s a phenomenal witness.”