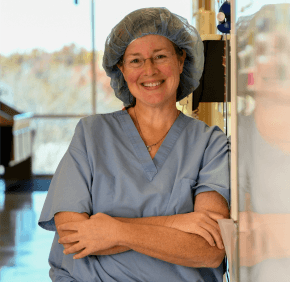 By Paul McMullen
pmcmullen@CatholicReview.org
Thanksgiving at the Lewis home in Sonoma, Calif., involves a neighborhood pot-luck feast. Christmas, likewise, revolves around food. Both involve giving thanks, but gratitude for a doctor 2,800 miles away isn’t something an 18-year-old in the house restricts to holidays.
The relationship between Nicolette Lewis and Dr. Leigh Ann Price is out of the ordinary, as is much of the surgeon’s work.
Price heads up the National Burn Reconstruction Center at MedStar Good Samaritan Hospital in Baltimore. Her patients come from France, Florida, Kansas and California, where Lewis suffered burns over more than 25 percent of the front of her body during a marshmallow roast that went horribly awry in June 2014.
Lewis is scheduling her sixth visit to Baltimore. Since March 2015, she has made five trips here and undergone 11 surgical procedures. All were led by Price, with the young woman’s input and the long haul in mind.
“It’s going to be a few years with her,” Lewis told the Catholic Review during a stop last winter in Baltimore.

Nicolette Lewis visits in February with with Dr. Leigh Ann Price at MedStar Good Samaritan Hospital in Baltimore. (Olivia Obineme/Special to the Review)

Price recently elaborated.
“It’s not acute,” she said, “It’s not, ‘I take out your appendix’ and never see you again. We’re going to focus on getting you to look like what you did before your burn injury.”
Price’s empathy and patience won over Lewis during a 45-minute teleconference early last year.
“She got off the phone,” Margrett Lewis, Nicolette’s mother, recounted, “and said, ‘I’m going (to Baltimore). You and Dad can keep talking, but my mind’s made up.’ … When a doctor is educating patients, and they’re listening, as a parent you say ‘3,000 miles doesn’t seem like that big a deal.’ When there is a good fit, it’s right.”
Nicolette had been aware of Baltimore, she said, “since I was in the fifth grade,” when she first announced her interest in attending The Johns Hopkins University medical school.
While her twin sister, Alexis, is a freshman at the University of Denver, Nicolette is taking a gap year between Justin-Siena, a Catholic high school in Napa, Calif., and a college to be determined on the West Coast. She has already received an education in the moving and molding of skin that has included tissue expansions, grafts, lasers and hyperbaric therapy.
“Before I was burned, I wanted to be a trauma surgeon,” said Lewis, who provides post-op briefings to her parents. “I’ve been with a lot of doctors, through a lot of consults. They seem to either have a real good personality, or be a very good doctor. She (Price) is both.”
The Lewis family heard of Price through Lesia Cartelli, the founder of Angel Faces, a Southern California-based non-profit that provides retreats and support for girls and young women with disfiguring injuries.

Home in California, Nicolette Lewis displays some of the healing of 11 procedures at the National Burn Reconstruction Center. (Courtesy Margrett Lewis)

“What’s most remarkable is the time she (Price) gives to patients, to me, to our organization,” said Cartelli, herself a burn victim at age 9. “We’re dealing with adolescent girls, some of whom have an element of insecurity, fear and vulnerability. Sending them to Dr. Price is like sending them to a second mom.”
Thanks to reconstruction surgery, Nicolette has gone this year from wearing a full scarf that hid scars on her neck to a choker necklace.

The Lewis family worships at St. Francis Solano Church in Sonoma. Raised Baptist in Missouri, Price’s mission has taken her to one of the five Catholic hospitals in the Archdiocese of Baltimore.

“There’s a crucifix in most rooms,” Price said. “I’ve never worked in a hospital that at 9 o’clock in the morning you hear a prayer over the intercom. That’s a little different. You see some people, they’ll just keep walking, not blink an eye. Others will stop and actually listen, then pick up once the prayer is finished.”
Price heads a center that was founded in 2008 by Dr. Robert Spence, a pioneer in the use of plastic surgery to treat burn victims. She had a fellowship with him at Johns Hopkins Bayview Medical Center, and replaced him at MedStar Good Samaritan when he retired in 2014.
“Dr. Spence taught me,” Price said, “you don’t tell patients what they need, you ask, what bothers them? … A lot of burn reconstruction patients have body dysmorphology, body image issues. If you start pointing out things that weren’t even on their radar, it becomes a focal point.
“That’s one of the rules of burn reconstruction surgery. Something that bothers me, might not bother the patient.”