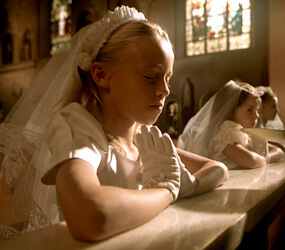 PHOENIX – Maybe TV isn’t so bad after all.

An estimated 92,000 inactive Catholics in the Phoenix Diocese have come back to the church in the last year thanks in large part to a groundbreaking television advertising campaign called Catholics Come Home.

The promotional spots featured people and locations from around the Phoenix Diocese to promote the church during prime-time television. The cornerstone of the campaign, the Catholics Come Home Web site, addresses often misunderstood aspects of the faith.

“For those who had fallen away from the practice of their faith, it let them know that we want them to come home,” Phoenix Bishop Thomas J. Olmsted said.

The commercials, which ran during Lent in 2008, detail the good works of the Catholic Church throughout history. They also offer real-life testimonials of local fallen-away Catholics explaining what turned them away and what drew them back.

“Phoenix was supposed to be this quiet little test,” said Tom Peterson, a former resident of Phoenix who is president and founder of Catholics Come Home, which is now based in Georgia.

“Word went worldwide as soon as you launched,” he said in an interview with the Phoenix diocesan newspaper, The Catholic Sun.

More than half a million different visitors from all 50 states and 80 countries have visited the Web site catholicscomehome.com since the spots first aired.

The response was so positive that other dioceses around the country are looking to Phoenix for ideas on bringing Catholics back to the church.

The Diocese of Corpus Christi in Texas recently launched different versions of the television spots in English and Spanish. Each parish supplemented the commercials at Ash Wednesday services with a brochure for everyone answering common faith-related questions and listing Mass times and ministries.

The Catholics Come Home spots will appear in more than a dozen other dioceses around the country later in 2009 or early 2010. By the time Advent rolls around in 2010, organizers say they’ll go national on major networks.

“Our family is made up of every race,” begins the longest of the spots. “We are young and old, rich and poor, men and women, sinners and saints.”

The two-minute ad highlights the vital part the Catholic Church has played in establishing hospitals, orphanages and schools in addition to its role in science, marriage, family life, Scripture and sacraments.

“If you’ve been away from the Catholic Church, we invite you to take another look,” the announcer says toward the end. “We are Catholic; welcome home.”

Another two-minute ad shows men and women alone watching the best and the worst scenes from their lives play back before them on an old movie reel.

The final ad that aired – Mr. Peterson has dozens more like it ready to go – featured snippets of testimonials about why Catholics left the church and what they found upon their return.

Mr. Peterson said the Catholics Come Home campaign has “the potential of re-Christianizing our society and even catechizing the world.”

A lot of pro bono production, nearly $1 million from various donors and foundations, and a grant from the Catholic Community Foundation helped put the ads on the air.

The Diocese of Phoenix has witnessed increased interest in the church, which leaders are attributing to last year’s campaign.

“It’s exciting to see the fruits that continue to grow from this,” said Ryan Hanning, coordinator of adult evangelization for the diocese. According to Mr. Hanning, a number of the faithful have found a renewed passion for the church, while fallen-away Catholics rejoined parish life.

Mr. Hanning worked closely with Mr. Peterson on the Catholics Come Home campaign and ensured that parish leaders, especially those in faith formation, were ready to welcome back Catholics and resolve sacramental and doctrinal issues. More than 25 parishes created programs to welcome Catholics back to the church.