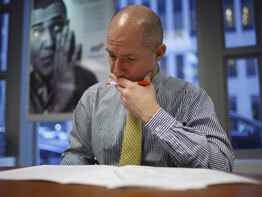 WASHINGTON – Promoting Catholic social teaching to politicians at the White House and in Congress is like riding a teeter-totter: first up and then down. The direction depends on the issue being debated and the party in power.

But no matter the direction, as John Carr, executive director of the U.S. Conference of Catholic Bishops’ Department of Justice, Peace and Human Development, points out, the underlying principle guiding the Catholic legislative agenda in the 111th Congress remains unchanged: promoting human life and dignity.

“We’ve got a new administration and new Congress and the same principles,” Mr. Carr told Catholic News Service a few days after the inauguration of President Barack Obama. “We have new opportunities in some areas and new challenges in others.

“The key issue is not which party it helps or what the president’s approval rating is. It’s whether the poor gain,” he said.

Advocates such as Candy Hill, senior vice president for public policy and government affairs at Catholic Charities USA, are poised to take advantage of opportunities to discuss a broader social agenda, an area that took a back seat to the wars in Iraq and Afghanistan and homeland security concerns under President George W. Bush.

At the same time, explained Richard M. Doerflinger, associate director of the U.S. bishops’ Office of Pro-Life Activities, pro-life advocates face more significant challenges. Despite President Obama’s offer to seek common ground on abortion, these advocates realize he is not going to call for an end to abortion altogether.

The changing political landscape in Washington has forced Mr. Doerflinger to adopt a defensive posture to preserve existing laws that protect unborn children. Cardinal Justin Rigali of Philadelphia, chairman of the bishops’ Committee on Pro-Life Activities, in a Feb. 5 letter urged Congress to maintain all pro-life provisions in the appropriations bills that must be approved to keep government programs funded past March 5.

Mr. Doerflinger said the bishops also want to maintain the conscience rights of health care workers so they are not forced to participate in or refer women for abortion. Ensuring the survival of the Hyde amendment, which has banned the use of federal funds for abortion since 1976, is vital, he added.

In a step to help reduce abortions, the U.S. bishops are continuing their support of the Pregnant Women Support Act, which has been reintroduced in both houses of Congress. The act would fund health care services for pregnant women, decreasing the likelihood that they would choose abortion.

Meanwhile, looming ahead is the Freedom of Choice Act. Although not yet introduced, the act’s sponsors are waiting for the right moment to do so, Mr. Doerflinger said. The USCCB is spearheading a nationwide postcard campaign urging parishioners to ask their legislators to block the bill.

Beyond abortion, underlying the social agenda of Catholic agencies is the belief that the country’s budget is a moral issue and serves to emphasize where society’s values and priorities rest.

Given that understanding, long-standing issues such as health care reform to improve access to health services for all, funding of the National Housing Trust Fund to increase the inventory of affordable housing for families, climate change and the creation of “green” jobs are high on the priority list of the bishops, Catholic Charities and Network, a Catholic social justice lobby.

Mr. Carr warned, however, that getting the economy growing again remains a sticking point to passage of a broader social agenda.

Catholic advocates are hoping the economic stimulus package that was still being debated Feb. 6 in the Senate will address some of the church’s concerns, especially for the poor and vulnerable and the rising tide of unemployed people trying to cope in a recessionary economy.

In addition, Ms. Hill and her counterparts are calling for a boost in funding for the school nutrition and Women, Infants and Children programs, passage of the Healthy Families Act so companies provide paid sick leave for workers, and additional support for Medicaid and social service block grants.

“We have to admit as a nation that while safety-net programs are absolutely essential, merely expanding safety-net programs is not a solution to cutting or eliminating poverty,” Ms. Hill told CNS. “Only when we look at the needs of human beings – education, access to jobs that pay well, the opportunity to have assets – can we talk about a country where people are able to reach their full potential.”

President Obama’s Feb. 4 signing of the State Children’s Health Insurance Program is seen by advocates as a positive first step on the road toward greater attention to social needs. Of particular note in the new law are provisions extending health care coverage to legal immigrant children and legal immigrant pregnant women.

Such provisions signal to Kevin Appleby, director of immigration and refugee policy for the USCCB, that comprehensive immigration reform may be on the horizon. An immigration reform package that has been debated since the 9/11 disaster but never acted upon could be offered sooner rather than later if the economy shakes its doldrums, he said.