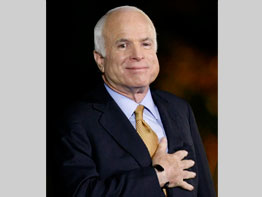 PHOENIX – Despite the fact their candidate trailed in every major national poll, supporters of Republican presidential nominee Sen. John McCain of Arizona still guarded a quiet hope that the “maverick” would pull off a miracle on Election Day.

“I still hope McCain will come back,” said Jeff Kovac, a parishioner at St. Timothy in Mesa, who watched the results pour in at McCain’s election night rally in Phoenix Nov. 4. “I don’t know what we’re going to do if (Sen. Barack) Obama wins.”

A few minutes later came the announcement that the Democratic senator from Illinois had won the presidency, becoming the first African-American to take the White House.

“We have come to the end of a long journey,” McCain told supporters assembled outside the Arizona Biltmore, congratulating his opponent for his historic accomplishment.

He underscored Obama’s ability to “inspire millions” to take part in the democratic process.

“His success alone commands my respect,” he added, flanked by his wife, Cindy, and his running mate, Alaska Gov. Sarah Palin, and her husband, Todd.

Across the country, Obama gave a victory speech in Chicago’s Grant Park before more than 100,000 people.

“It’s been a long time coming, but tonight, because of what we did on this day, in this election, at this defining moment, change has come to America,” Obama said.

“The road ahead will be long. Our climb will be steep,” he said. “We may not get there in one year or even one term, but America – I have never been more hopeful than I am tonight that we will get there. I promise you – we as a people will get there.”

Some of the Catholic McCain supporters at the Phoenix rally said their disappointment in the election results would make them even more committed to their faith.

“It’s time for the church to rise up,” said Kimberly Scoggin, a parishioner at Our Lady of Mount Carmel in Tempe. “Catholics need to come back to their core values.”

She told The Catholic Sun, Phoenix’s diocesan newspaper, the Obama victory was a “sad day” for the pro-life movement because of his support for keeping abortion legal.

Her husband, Joe, echoed her sentiments.

“Our hope isn’t in the government. It’s in Jesus Christ,” he said. “I just wish Catholics would vote as one with life as the pre-eminent issue.”

The Scoggins attended the rally with their pastor, Father John Bonavitacola.

Pro-life advocate Tina Torry, author of “Short of a Miracle” – which documents her botched abortion and the subsequent birth of her daughter – also felt let down.

“I’m going to trust God even though we’re disappointed,” she said. “God’s ways are just different and we don’t know.”

Torry said the pro-life movement couldn’t depend on “the law of the land.”

“We have to go out there and reach those people,” she said, referring to pregnant mothers considering an abortion. “We have to keep speaking the truth about abortion. We have to change hearts.”