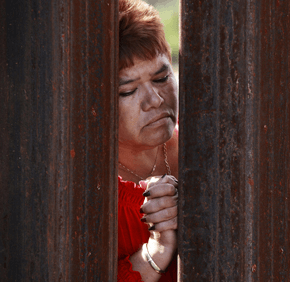 By Maria Wiering
MWiering@CatholicReview.org
The general election isn’t until November, but the primary election is June 24, with early voting June 12-19. With every seat in the Legislature up for election and one-third without an incumbent in the race, the primary election’s results will significantly shape the direction of Maryland’s lawmaking for years to come, said Mary Ellen Russell, Maryland Catholic Conference’s executive director.
The Maryland Catholic Conference, which advocates for public policy on behalf of the state’s bishops, urges Catholics not only to vote, but also to educate candidates about issues important to the local church.
In this article, the Catholic Review highlights the MCC issue of immigration.
Immigration
Oscar Carrillo, 32, said he was arrested by Frederick police in 2011 for driving without a license after being stopped for an object obscuring his rearview mirror. After he failed to produce a current license, police asked for his Social Security card, he said. Again, he was empty handed; an emigrant from Guatemala, he had entered the U.S. illegally in 2005.
He spent two nights in jail. When the police released him, he said, federal immigration officials arrived immediately to arrest him. He is not certain, but believes police alerted U.S. Immigration and Customs Enforcement (ICE) about his status. Unlike others he knows in similar situations, he was not immediately deported. Instead, he entered a supervision program and is working toward obtaining a visa, he said.
Carrillo said he feels intimidated by the situation, as does his wife and 3-year-old son. Because of their mistrust for local law enforcement and fear of deportation, they have not reported gang activity around their apartment complex, he said.
The MCC supports the Maryland Law Enforcement Trust Act, which would prohibit local law enforcement officials from detaining, searching, stopping or arresting anyone for the purpose of investigating an immigration violation, leaving that concern strictly in the federal realm. The legislation aims to improve the relationship between local law enforcement and the immigrant community.
Where do candidates stand? Check out the MCC survey
Also see:
Nonpublic school aid is a focus of the Maryland Catholic Conference
MCC on life issues
Information to improve for parents of babies diagnosed with Down syndrome
PrevNext