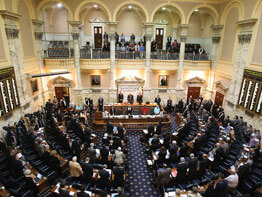 Leaders of the Maryland Catholic Conference made progress on a wide range of issues during this year’s Maryland General Assembly, but a reluctant legislature failed to give them a lot of what they hoped for.

Lawmakers established a commission to study the death penalty in Maryland, but they rejected a long-sought ban on capital punishment promoted by the MCC.

While legislators did not give the green light to same-sex marriage or civil unions, they approved measures the MCC fears will weaken the traditional definition of marriage in Maryland.

The legislature passed $4.6 million for the textbook/technology loan program in nonpublic schools – $1 million more than allocated by Gov. Martin J. O’Malley, but the funding level was down from the $6 million sought by the MCC. And while a program to give tax credits to businesses that support students in nonpublic and public schools made it through the Senate, it failed in the House of Delegates.

The MCC won a key victory in defeating legislation that Catholic leaders believe would have crippled church ministries, parishes and schools by lifting the statute of limitations on child sexual abuse civil suits. The MCC also helped defeat a bill that would have severely limited the outreach of crisis pregnancy centers across the state.

“As a result of the decisions of the special session, lawmakers were a little gun shy in the General Assembly,” Mr. Dowling said.

While the MCC had high hopes the death penalty could have been repealed this year and replaced with sentences of life without parole, it could not get the measure out of the Senate Judicial Proceedings Committee. There are pro-repeal majorities in the House committee and on the House and Senate floors, Mr. Dowling said, but repeal legislation was withdrawn when it was clear the Senate committee would not budge.

“They’ll be another try next year and next year we intend to prevail,” said Mr. Dowling. “Public sentiment is on the side of repeal and, one-by-one, lawmakers are realizing that there’s no rationale but vengeance for continuing the practice of legal homicide.”

The death penalty commission will provide recommendations regarding racial, jurisdictional and socio-economic disparities in death-penalty sentencing as well as the risk of executing innocent people, Mr. Dowling said.

Nancy Paltell, MCC associate director for the respect life department, said she was elated that bills targeted at crisis pregnancy centers never made it out of committee. Pushed by pro-abortion groups like NARAL Pro-choice Maryland, the bills would have required crisis pregnancy centers to tell women they are “not required” to give factual information.

“It would have hurt women by making it more difficult for them to get the help they need,” said Ms. Paltell.

Ms. Paltell was disappointed that bills requiring abortion clinics to offer women the chance to see a sonogram did not pass. She was also frustrated that after senators cut funding to $5 million for research that includes embryonic stem cell research, lawmakers ultimately agreed to provide $19 million for the program. The Catholic Church opposes embryonic stem cell research because it results in the destruction of human life.

“We can’t support putting a penny into unethical research,” she said.

Mary Ellen Russell, MCC deputy director for education and family life, said nonpublic school advocates “laid the groundwork” for future success. While the legislation establishing the BOAST tax credit (Building Opportunities for All Students and Teachers in Maryland) did not make it out of a House committee, Ms. Russell was pleased that by a 30-17 vote, the Senate passed the bill.

“We are really close to getting it passed,” said Ms. Russell. “I think there’s a clear recognition we have a majority that want to pass this bill.”

Ms. Russell was disappointed that Gov. O’Malley allocated only $3.6 million in his budget for the textbook/technology program in the nonpublic schools. An additional $1 million was secured for the program when lawmakers approved a provision allowing extra funding for the program from the tobacco settlement.

Another highlight was the passage of a bill requiring nonpublic school superintendents or principals to be notified if a student has been arrested for a sexual or violent crime, Ms. Russell said.

While she was pleased lawmakers did not approve gay marriage, Ms. Russell was concerned they passed bills exempting property transfer taxes and granting medical decision-making rights for domestic partners.

“It’s cementing in law a definition of domestic partnerships that we find very problematic because it dilutes the state’s recognition of marriage as being between a man and a woman,” she said. “The difficulty in challenging those bills has been the fact that they were introduced under the guise of securing benefits that no one would argue with in the case of the medical bill.”

Julie Varner, MCC associate director for social concerns, said it was a very difficult year for securing funds for the poor and vulnerable. Lawmakers were reluctant to support such programs in a tight fiscal year. MCC-supported programs in housing and immigration failed.

“While the passage of bills is always the goal, it’s also important to inform legislators about the issues,” she said. “We accomplished that.”

Mr. Dowling credited Catholic parishioners for speaking out against lifting the statute of limitations on civil suits related to child sexual abuse. Del. Eric Bromwell of Baltimore County sponsored the bill, but withdrew it after hearing from Catholics in his district, Mr. Dowling said.

The measure would have opened a 16-month window during which suits involving decades-old abuse claims could have been filed, according to Mr. Dowling. Early in the General Assembly, Church leaders pointed out that other dioceses around the country have been bankrupted by similar legislation, resulting in closed parishes and severe limits on outreach ministries.

“The Maryland-serving dioceses manage model child-protection programs and provide exemplary outreach services to victims and their families,” said Mr. Dowling, noting that Maryland has no criminal statute of limitations for child abuse. “Legislation of this kind does nothing to protect children. It targets the church and would prove harmful to diocesan parishes, school sand service programs.”