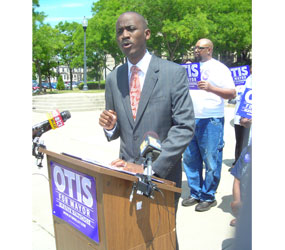 Otis Rolley, a Democratic challenger to Baltimore Mayor Stephanie Rawlings-Blake, wants to give $10,000 education vouchers to students in the city’s worst-performing middle schools – vouchers that could be used at Baltimore’s Catholic and other nonpublic schools.

Speaking in a June 13 press conference outside public school headquarters in Baltimore, Rolley proposed closing the city’s five worst middle schools and giving enrolled students education vouchers. He estimated that the program would cost $25 million. Funding would be appropriated from the city schools’ budget, a step that would require state legislation.

Rolley emphasized that his plan is not a “wholesale voucher system,” but a way of responding to what he termed a “crisis.” Of the 82 city schools that have middle school grades, he said, only 30 made adequate yearly progress in 2010. As much as 60 percent of graduating seniors are not college ready or adequately prepared for the workforce, he said.

“One of the main reasons young families leave the city is that they don’t feel that the schools will provide their children with a quality education,” Rolley said.

In connection with his voucher proposal, Rolley called for returning control of city schools to the mayor. He also proposed building or rehabilitating more than 50 schools in 10 years through public-private partnerships, and said he wanted to expand the number and quality of charter schools.

Pamela Sanders, principal of St. Ambrose School in Park Heights, said she was pleased to see the voucher issue raised in the mayor’s race. Last year, 13 Catholic schools in the Archdiocese of Baltimore closed – largely due to increased costs and declining enrollment.

“(Vouchers) could have a positive impact because one of the biggest reasons parents give for not attending Catholic schools is financial,” she said. “If people had an option of taking their voucher to a school like ours, it would be a tremendous help.”

Sanders expressed doubt, however, that a plan as ambitious as Rolley’s would get very far. Public school unions and others would oppose it, she said.

“It would be wonderful,” she said, “but we can’t even get BOAST passed.”

BOAST is a bill that would establish a business tax credit for businesses that donate to programs benefitting public and nonpublic school students and teachers in Maryland. Although supported by Gov. Martin J. O’Malley, BOAST has failed to clear the Maryland General Assembly.

Ellen Robertson, associate director for education with the Maryland Catholic Conference, said she welcomes anything that would help Catholic schools in the city. She noted, however, that she wants to see more details in the Rolley plan.

“Obviously, we’d love to see a statewide proposal,” Robertson said. “The needs exist in many, many areas of the state.”

Under Rolley’s proposal, vouchers could be used in any combination for tuition, meals, transportation and uniforms. Students not using the vouchers at a private or parochial school would be reassigned to a middle school that has reached or is on target to reach its adequate yearly progress.

Rolley noted that Catholic and other nonpublic schools all serve the children of Baltimore.