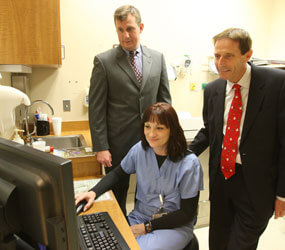 As Larry M. Beck and the leadership of Good Samaritan Hospital searched for a chief operating officer in 2006, their charge went beyond landing someone who knew his way around a ledger.

The new hire would also be groomed to replace Beck as president of the 317-bed community teaching hospital in Baltimore. When the day came for Beck to step down Jan. 1, he was supremely confident that Jeffrey A. Matton remained the right man for the job.

“When we brought Jeff here in 2006,” Beck said, “the succession planning started then, in earnest. He is ready.”

Matton is equally secure in the knowledge that his institution is intent on a smooth transition, as Beck’s retirement will include a part-time consultant’s position at the hospital.

“Larry is Good Samaritan, in so many ways, and there’s no reason not to continue that,” Matton said. “He’ll assist on strategic pieces. Larry’s continuing presence is important to the organization.

“Look back at our history. One of the real basics at Good Sam has been the continuity of leadership. We’ve only had a couple of presidents. You combine that with some of the tenure of the medical staff, and you have a stability that serves as bedrock for the organization.”

The switchover is not without precedent at Good Samaritan, which was founded in 1968.

Beck served an apprenticeship similar to Matton’s, as he came to Good Samaritan in 1990 as chief operating officer and was elevated to president and CEO in 1994, when he replaced James A. Oakey.

“And Jim Oakey was at Good Samaritan 20 years before I got here,” Beck said.

During Beck’s tenure atop Good Samaritan, the hospital strengthened several partnerships with Johns Hopkins Medicine, admissions grew 75 percent and the number of employees increased to 2,344.

Beck, 60, took pride in getting to know as many staffers as possible by name, striving to move as comfortably among the rank and file as he did among fellow power brokers.

He represented the Catholic Hospitals Serving Maryland on the Maryland Catholic Conference’s administrative board, where he has been replaced by Thomas R. Mullen, the president and CEO of Mercy Medical Center.

Beck and his wife, Debbie, are longtime parishioners of St. Pius X in Rodgers Forge. He received the Papal Medal of Honor in 2007, in part, he said, for preserving Good Samaritan’s Catholic identity after it became part of the MedStar Health system in 1998.

“Some of that (the papal medal),” Beck said, “came from … maintaining that Catholic identity. That was pretty well prepared for even before the merger, ensuring that the values of the organization would continue to reflect that Catholicity.

“Jeff’s perfectly prepared to carry that forward as well.”

Matton, 38, and his wife, Michele, have three children, Andrew, 8; Anna, 6; and Ella, 5, who attend School of the Incarnation in Gambrills. They reside in Millersville, and are parishioners of Our Lady of the Fields.

A self-described Navy brat, Matton was born in Monterey, Calif., when his father, a member of the Class of 1965 at the U.S. Naval Academy, was stationed at Fort Ord. After billets in Newport, R.I.; Jacksonville, Fla,; Sicily and Norfolk, Va.; his parents retired to Davidsonville, just south of Annapolis.

Prior to Good Samaritan, Matton was vice president for professional services at Washington Hospital Center.

Both Matton and Beck were in shirtsleeves as they discussed the transition with The Catholic Review.

Beck recalled his first job in the health care industry, scrubbing floors in a hospital in his native Michigan in 1966.

“That’s how I paid my way through college,” he said.

Beck will continue to scrutinize Good Samaritan from the bottom up, while advising Matton on the big picture.

“I’ve never seen someone own their work more than Larry has,” Matton said. “I call him the chief Good Samaritan. He’s going to do the same things he’s always done.”