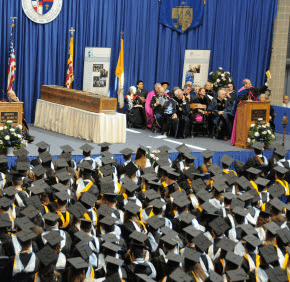 By Maria Wiering
mwiering@CatholicReview.org
Twitter: @ReviewWiering
EMMITSBURG – Archbishop William E. Lori gave the commencement address at Mount St. Mary’s University May 12 as its 2013 graduates prepared to receive their diplomas.
“Mastery of the moment is mastery over life,” he told them, drawing the line from German writer Marie von Ebner-Eschenbach.
“The matter that is before us must be decided, for good or for ill, right now,” he said. “Virtue or vice are being built up in us at every moment in our lives, in all of our decisions, and deep down we know that what brings us happiness and satisfaction are not passing diversions, but rather living lives of authentic virtue.”
In 1977, Archbishop Lori received a master’s degree from Mount St. Mary’s Seminary, where he now serves as chancellor.
Thomas H. Powell, the university’s president, awarded him an honorary doctorate during the ceremony.
“President Powell, my mom and dad thank you, because they’re happy to know that at last their son has amounted to something,” quipped the archbishop, who assumed leadership of the Archdiocese of Baltimore one year ago.
In his address, Archbishop Lori advised the graduates to be conscious of each moment in life and build character through habits of virtue, not vice.
“Your education at Mount St. Mary’s has given you the tools to be men and women of virtuous character so as to inherit everlasting life,” he said. “Whether or not we use these tools is up to us.”
He also urged them to find their identity in Christ.
“If you want to know who you are and who you can become, follow Jesus,” he said. “If you want to know what real virtue is, follow him.”
According to the Mount, 572 students in its master’s and bachelor’s degree programs were eligible to graduate, with 463 attending the commencement exercises. Slightly more than half of its graduates are from Maryland.
This year marked the university’s 205th commencement. Powell offered high praises for the class of 2013.
“Without a doubt, this is the best class I have seen graduate at Mount St. Mary’s,” he said.
In addition to Archbishop Lori, several other community leaders were granted honors during the Mother’s Day ceremony. Dr. Michael and Stephanie Caulfield and Lt. Col. Paul T. Jackson were awarded the President’s Medal, and Marvin and Donna Stocker were awarded honorary degrees.
Bishop Mitchell T. Rozanski, auxiliary bishop of Baltimore, also attended the commencement, where he handed a degree to his niece, Ashley Rozanski.
Graduation was “bittersweet” for Kendra Gaskin, 24, who received a master’s degree in business administration. A native of Accokeek, she entered the graduate program immediately after finishing her undergraduate degree, also at the Mount.
Leaving “the mountain” was going to be difficult after six years, she said, calling it “a place where I’ve grown into who I am today.”
However, she’s focusing on what’s to come.
“I’m looking forward to better things, because my education here has prepared me for that,” she said.
Also see:
Mount students positive role models for juvenile offenders
Copyright (c) May 13, 2013 CatholicReview.org
PrevNext