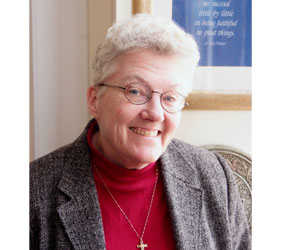 BROOKLANDVILLE – Just a week removed from the end of the school year, Sister Shawn Marie Maguire gathered her faculty and staff together in mid-June for some news: the next academic year will be the Sister of Notre Dame de Namur’s last as president and headmistress of all-girls Maryvale Preparatory School.

“It was emotional,” Sister Shawn told The Catholic Review in her first interview since the announcement. “They are my family community.”

The 65-year-old school, which serves grades 6-12, released a statement about Sister Shawn’s decision June 22, the 42nd anniversary of the canonization of St. Julie Billiart, foundress of the Sisters of Notre Dame de Namur.

“It’s not an easy decision, but it’s the right one,” Sister Shawn said. “It seems that it’s a good time to just find someone else, another leader who can take the school to the next level, to the next place where it needs to go.”

During her tenure, the school has added a sixth grade and opened the Maria Luisa Rodriguez Center. The school’s Learning Center was renamed Maguire Hall in 2007 in honor of Sister Shawn. Maryvale has kept up with the times as well, recently announcing that all students will receive iPad tablet computers.

The school is in the final phases of the In Her Name Campaign, a $12 million capital effort that has raised $8.5 million thus far and will end next January. The school’s largest campaign ever includes the construction of a humanities building and auditorium, turf field and track, additional practice fields and enhancements to the campus infrastructure.

“Of course, I want to be here to open that building and cut that ribbon,” Sister Shawn said.

Board of Trustees chair J. Brian Jarboe praised Sister Shawn’s leadership over the past three decades.

“She is remarkable for her commitment to the school; her stewardship of the students, faculty and administration; and her clear vision for the institution’s future,” he said in a statement.

Elizabeth Lerch Visconage, a member of the school’s class of 1974 and the vice president of institutional advancement and human resources for St. Mary’s Seminary and University, is heading a seven-person search committee for a new president, the 10th in Maryvale history.

The school has never had a headmistress or president who was not a member of the Sisters of Notre Dame de Namur. It was once in the school’s bylaws that a member of the order had to hold the position.

School officials and leaders of the search committee, which includes a member of the Sisters of Notre Dame de Namur, say the charism of the order will remain, but a lay person could be hired.

Visconage said: “We’re committed to finding the best candidate. We’re not going to select anybody unless we feel they understand the history and the charism of the Sisters of Notre Dame de Namur and how that works for the mission of Maryvale going forward.”

The school will hold listening sessions with members of all the school’s constituencies during the late summer and early fall.

Sister Shawn said she wants to help facilitate a smooth transition for her successor. She considers being Maryvale’s president an extraordinary gift and loves the school for a simple reason.

“The people,” Sister Shawn said through tears. “In particular, watching the students grow and seeing a young woman come in as a sixth-grader and shaking her hand at graduation and just seeing the growth that has taken place in them. People will say, ‘You are Maryvale,’ and I’ll say, ‘We are Maryvale.’ ”