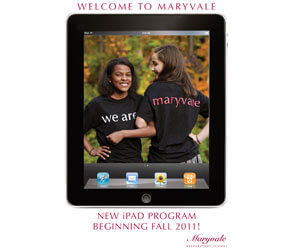 The all-girls school held the second of three meetings with parents to inform them of a program that will result in every student using an iPad 2, the latest Apple tablet computer. The program will begin in the fall.

“We’ve got to teach our kids different,” Kilduff said. “They’re all using these things now. Whether we want them to use them or not, they’re there. That’s the way they interact.”

The first iPad debuted in April 2010 and the latest version debuted this past March. Thus far, 15 million iPad units have been sold. It is changing the way many people consume books, surf the web and gather and share information. It features application software, better known as apps, that help users perform specific tasks. The iPad 2 has an HD camera on both sides, which could allow for Skyping among teachers and fellow students.

About a pound in weight, the iPad 2 will be part of a $150 technology fee for students.

The school researched the possibility of having laptops for every student during the last few years, but it was cost prohibitive. When the iPad debuted, the school had students compare a smaller laptop with an iPad. Apple’s game-changer won.

“I think it’s a more practical learning tool for the students,” principal Donna Bridickas said. “It’s compact and portable. (The students are) all so used to multitasking and used to using these devices.”

Students will keep the iPads during their time at Maryvale and return them upon graduation. The school has a three-year plan with the iPad. If a new technology comes along at that time, Maryvale will adjust.

Parents will have control over content and the school’s firewalls will prevent any objectionable material from being accessed online.

Sarah Butcher, the school’s digital media specialist, said students are more engaged with an iPad 2, which has an instant power-up and online access.

The school’s English department will go almost completely virtual, as classic novels and the works of William Shakespeare will be accessible for free.

The Catholic High School of Baltimore announced a program earlier this school year in which it was implementing a tablet e-reader. Such developments could force text book companies to start offering content online. Maryvale is heading down a similar course.

“I think as more and more schools are going to some form of a digital e-reader,” Bridickas added, “it’s going to basically challenge the text book companies to make that available.”

Anna Flahive, a sophomore, is looking forward to using the apps, taking notes, using the touchscreen keyboard and reading books online. If the school can successfully negotiate with textbook companies, the day might come when heavy book bags are no more.

“Sometimes I’ll have tons of books and it’s really heavy on my back,” Flahive said. “With the iPads, some books will be online and we can read them there. It’s really exciting to know our school will have the iPad.”

Added Cohen, who has taught sixth grade, “Some of my sixth graders weigh less than 100 pounds and their backpacks weight 35.”

“This is what we think is going to be the most engaging option and address a 21st century learner the best,” Butcher said. “We want to prepare them for their world.”