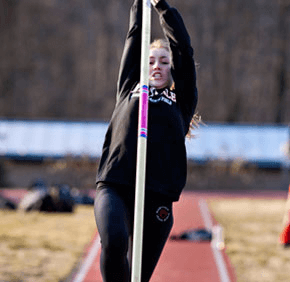 BROOKLANDVILLE – Maggie Rampolla said pole-vaulting caught her eye during her freshman year at Maryvale Preparatory School, when she saw a photo in the school’s yearbook of a fellow student attempting the event with the school’s track and field team.

“I thought it looked cool,” said Rampolla, 18, a Maryvale Prep senior. “It was something different.”

Being relatively short – she stands 5 feet 2 inches tall – and not having an on-campus weight room or facility at which to practice hasn’t slowed Rampolla from excelling at the sport.

“It’s tougher not having a track, especially with pole vaulting,” Rampolla said.

None of that, however, has stopped Rampolla from setting meet records this winter. At the Interscholastic Athletic Association of Maryland championships in February, soared to 11 feet, 6 inches.

To gain a perspective on her accomplishment, in the last decade only one girl has gone higher during the state public school championships.

Last summer she qualified for the USA Track and Field Junior National Championships.

In addition to her Maryvale practices, she travels to Washington, D.C., two or three times each week to train with a club, which she said has beefed up her skills.

She likes pole-vaulting because “you’re doing it for your team but also for yourself,” Rampolla said.

While a novice vaulter, Rampolla has more than a decade of sports experience under her belt. She began playing soccer, lacrosse and gymnastics at age 5. She also plays volleyball. She played soccer at Maryvale for her entire high school career.

She believes her vaulting potential has helped her gain those admittances and scholarship offers, a bonus for the fourth of five children.

A parishioner of Sacred Heart, Glyndon, Rampolla has volunteered with Baltimore Saints Hockey through Baltimore Area Special Hockey, Inc., where children and adults with developmental disabilities, such as autism and Down syndrome, learn to skate.

“It was one of the greatest things I’ve ever done,” Rampolla said.

She has also participated in an annual school mission trip to the Dominican Republic where she and fellow classmates teach orphans English and how to play sports. She plans to go on the trip again this spring.

Rampolla is interested in broadcast journalism or becoming a teacher so she can travel internationally and become a teacher of English to underprivileged students and children with disabities.

After college, Rampolla said she hopes to pole vault recreationally or be a vaulting coach. She’s keeping an eye on the ultimate competition – the Olympics.

“I don’t see myself not doing sports,” said Rampolla, who added that she feels no pressure to play. “My parents are supportive of whatever we decide to do. They just want me to be happy.”