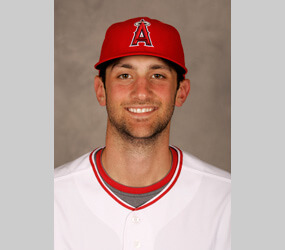 Mr. Adenhart was fatally injured in an automobile accident April 9 in Fullerton, Calif., that also claimed the lives of two others. He died in surgery after the accident, caused by a van running a red light.

The 22-year-old former student of St. Maria Goretti High School in Hagerstown had just pitched six strong innings in the previous night’s game against the Oakland Athletics. It was his debut season in the major leagues.

Police later arrested the driver of the van, 22-year-old Andrew Thomas Gallo, who fled the scene of the accident. He was allegedly driving drunk and was charged April 10 with three counts of murder and other felony violations.

Jim and Connie Adenhart, the baseball standout’s grandparents, spent more than an hour in prayer at St. Augustine after hearing about the death, according to Father Stephen Hook, pastor of St. Augustine.

“They’re very heartbroken,” said Father Hook, noting that he was in Baltimore when he heard the news and later met the family upon his return to Washington County. Monsignor Alfred Smith, retired St. Augustine pastor, also offered support to the family.

“I just embraced them both and let them express what was going on,” said Father Hook. “They brought pictures to the church of their grandson as a 4-year-old, when he was in high school and of him with the Angels. They were so proud of him.”

Mr. Adenhart played basketball at St. Maria Goretti before transferring to Williamsport High School in his junior year. While pitching for Williamsport High, he suffered a serious injury to his pitching elbow right before the June 2004 major league draft – causing him to sink to the 14th round when he was drafted by the Angels.

“All the teams walked away from him except for the Angels,” Father Hook said. “His grandparents felt very highly of the Angels for being generous to him.”

Mr. Adenhart needed ligament transplant surgery and the Angels gave him a $710,000 signing bonus and offered him the opportunity to rehabilitate under the team’s care. He rose up through the ranks in the team’s minor league system.

The Adenhart family released a written statement thanking the Angels for their help.

“He lived his dream and was blessed to be part of an organization comprised of such warm, caring and compassionate people,” the statement said. “The Angels were his extended family. Thanks to all of Nick’s loyal supporters and fans throughout his career. He will always be in everyone’s hearts forever.”

Father Hook said the phone was “ringing off the hook” at St. Augustine with calls from concerned parishioners and others in the community. Interviewed as the parish made its preparations for Holy Week, the pastor said Mr. Adenhart’s death would “have a sobering impact” on the celebration.

Mr. Adenhart made the Angels’ opening-day roster for the first time after compiling a 37-28 career minor league record.

Besides his grandparents, Mr. Adenhart is survived by his father, Jim, and his mother, Janet, and aunts and uncles.